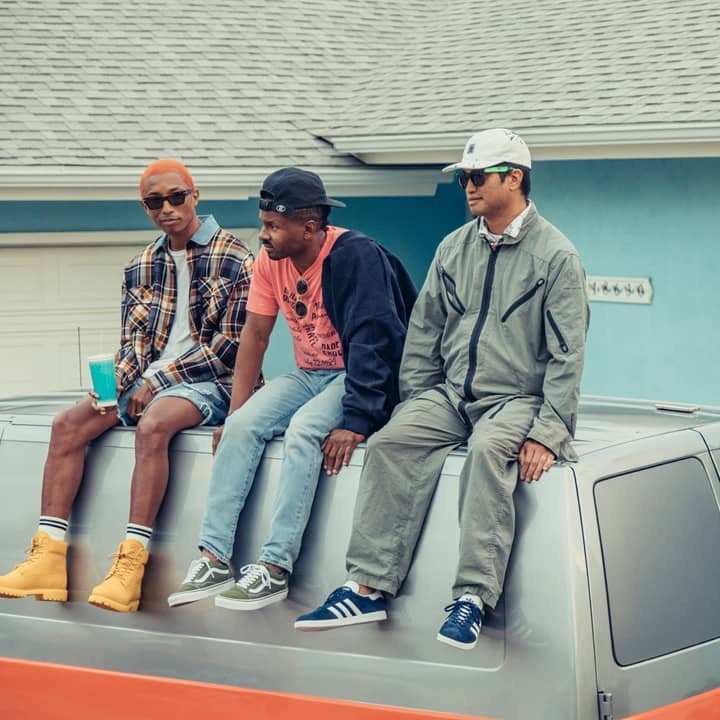 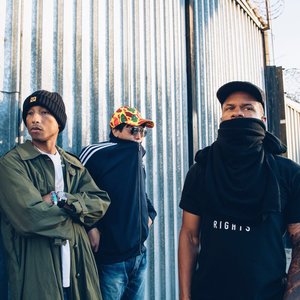 Williams and Hugo are also known as the Grammy-winning production duo The Neptunes.

Williams and Hugo originally recorded the band's debut album, In Search Of…, for European release in 2001 using similar digital production techniques used on Neptunes-produced records. However, they decided that if N*E*R*D was to be different from The Neptunes, it should sound different. This led to them re-recording the album (still titled In Search Of…) with the power pop band Spymob for worldwide release in 2002.

In Search Of… achieved moderate success in the United States.: the album reached number 59 on the Billboard 200; its first single, Lapdance, reached the top 40 on the rap charts; and its second single, Rock Star, reached the top 40 of the modern rock charts in the US and is still incredibly popular today. "Lapdance" also went top 40 in the Netherlands and its music video received heavy airplay on American MTV2. The album was well-received by critics even though it was not as successful as many of the Neptunes' productions for other artists.

The album won the second annual Shortlist Music Prize, awarded (by a group of musicians, journalists, and other music professionals) for Best Album that had sold less than 500,000 copies at the time of nomination. The band performed at the show, bragging that the week prior to the ceremony, the album had, in fact, achieved gold status by selling over 500,000 units.

The band recorded their second album Fly or Die during 2003. The band actually learned to play the tunes live, as Chad Hugo told MTV News on December 9, 2003: "We're the ones playing the instruments live this time. "I just started playing guitar last year so I'm learning as we go. Pharrell's playing drums. we didn't have time to learn certain instruments so we got Spymob to help us out."

The band also recruited some assistance to record the album with Lenny Kravitz playing on the track Maybe (which has been featured in ads for XM Satellite Radio) and Joel Madden and Benji Madden of Good Charlotte playing on the track Jump. Several of the tracks discuss issues of particular concern to adolescents, for example Thrasher, which is about bullies; Drill Sergeant, about rebellion; and Backseat Love, which talks about first love.

Fly or Die went on sale on March 22, 2004. The album went top 10 in the USA, while the lead-off single, She Wants to Move, went top 5 in the UK, top 20 in Norway, Ireland, and Denmark, and top 30 in Australia and top 40 in the USA and the Netherlands. The music videos for "She Wants To Move" and its followup single, "Maybe", received strong support from music video stations globally.

In 2005, N.E.R.D ended their contract with Virgin Records. After becoming "hooked" on the energy from their fans, the band began recording their third studio album, spending their own money. Williams and Hugo later established Star Trak Entertainment, a subsidiary of Interscope Records.

The third album from N*E*R*D is called Seeing Sounds. The album's title, as well as its content, revolves around the neurological phenomenon of synesthesia, the mixing of sensory modalities. After touring in promotion of their previous album, Fly or Die, N.E.R.D felt that album was too consistent. For their following album, they wanted to create the atmosphere of hyperactivity they knew their fans wanted.

The album debuted at number seven on the Billboard 200, selling 80,000 in its first week. It received mixed reviews, with critics lauding the production of the album. Some writers called the record N.E.R.D's best album to date, while others criticized Williams' singing and the album's content.

The album was released on June 10, 2008. The first single off the album, titled "Everyone Nose (All the Girls Standing in the Line for the Bathroom)" featured a video with fans as well as stars like Lindsay Lohan and Kanye West. In June 2008, the second single off the album, titled "Spaz", was used in a TV commercial for the Microsoft Zune. The third single "Sooner or Later" featured a video dedicated to America's economic crisis.