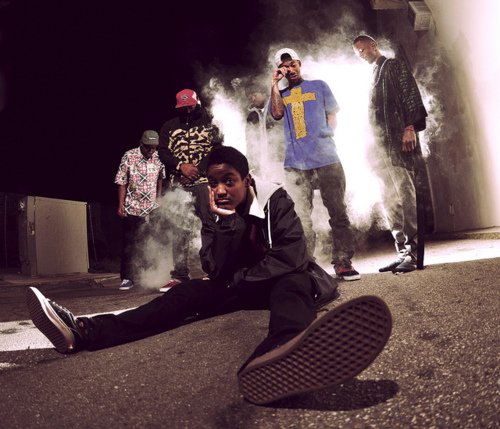 Odd Future Wolf Gang Kill Them All (OFWGKTA) is a hip-hop collective from Los Angeles, California, USA formed by Tyler, The Creator in 2007. Commonly referred to as OF, Odd Future, Wolf Gang, Golf Wang, and various other pseudonyms, the collective is known for their dark, violent, and offensive lyrical content, as well as their energetic live shows and general "don't give a fuck" attitude. Although frequently labeled as horrorcore, the group has repeatedly distanced themselves from the genre and is more typically considered alternative or indie hip-hop. In addition to several albums and mixtapes released by the many individual members and sub-groups of Odd Future, the collective has collaboratively released two mixtapes, one compilation album, and one full-length studio album.

In November 2008, the group released their debut mixtape, The Odd Future Tape (now sometimes called The Odd Future Tape Vol. 1), as a free download via the collective's official blog. The tape was recorded with nothing more than a computer camera microphone, and featured some tracks that would later make it onto Tyler, The Creator's debut LP, Bastard. The Radical mixtape was released in 2010, which featured all of the group's original members (save for Casey Veggies, who had left the group) as well as new contributors Earl Sweatshirt, Domo Genesis, Mike G, and Taco Bennett rapping over a collection of their favorite beats. On October 3, 2011, the group released a compilation album entitled 12 Odd Future Songs (which actually contains 13 songs), featuring select tracks from some of the many solo and sub-group albums released by Odd Future members that are frequently performed live, as well as a new track by The Internet. The OF Tape Vol. 2, Odd Future's debut collaborative LP and the follow up to their first mixtape, was released on March 20, 2012 via Odd Future Records.

In addition to artists, there are an unknown number of other members of Odd Future that do not contribute musically.