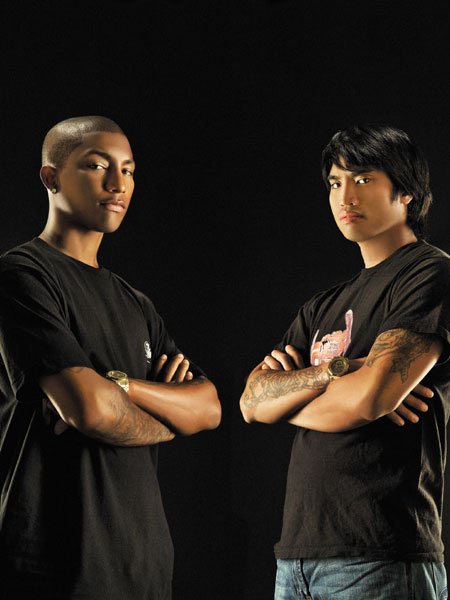 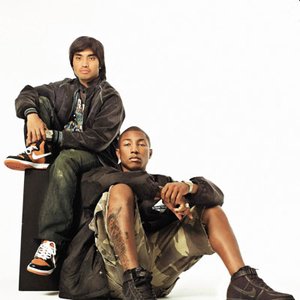 The Neptunes are a Grammy winning record production duo consisting of Pharrell Williams and Chad Hugo who created the sound for very successful hip hop, R&B and pop artists in the late-90s and early 2000s. Their biggest hits include Britney Spears' "Slave 4 U", Kelis' "Milkshake" and Nelly's "Hot in Herre".

The Neptunes' sound is a highly distinctive (although frequently imitated) brand of off-kilter, stripped-down electronic funk. They have an estimated net worth of $155 million.

Along with Timbaland and Dr. Dre they were the driving force behind many of the musical characteristics of late-90s/ early 2000s hip-hop and pop, helping to re-introduce sci-fi style sounds into the hip-hop mainstream, along with sounds from Middle Eastern and Asian music including percussion and woodwind.

Taking his cue from Dre and Diddy, Pharrell has further pushed the role of the producer into the public eye, singing and (later) rapping on records and appearing in videos, unlike his production partner Chad, and sometime vocal partner Shay Haley who tended to stay behind the scenes.

Pharrell and Chad met, despite going to different schools, at a jazz workshop at age 12 where Williams was a drummer and Hugo played tenor saxophone. They were also both members of a marching band; 'P' played kettle drum and Chad was a student conductor. In 1990 Chad and Pharrell formed a 4-piece "R&B type" group along with friends Shay and Mike Etheridge, which they named The Neptunes. Upon entering a local talent contest, they were discovered by Teddy Riley, whose studio was close to Pharrell's school. After graduating from high school, they signed with Riley as a group.

Through working with Riley, Pharrell went on to write a verse for Wreckx-N-Effect's 1992 #2 (billboard hot 100) hit "Rump Shaker". In 1994, Hugo and Williams had established themselves formally as a production duo under the previously used name "The Neptunes", and produced "Tonight's The Night" from Teddy Riley's group BLACKstreet's self-titled debut. Over the next three years they continued to produce occasionally. Some of the production, such as for SWV (1996) and Total (1996), had little resemblance to what would become their distinctive sound, while other songs such as Mase's 1998 No.8 (Billboard hot 100) hit "Lookin' At Me" (from the Harlem World album, 1997) showed clear signs the Neptunes sound was developing.

Their first major production hit, and the most clear beginning of the distinctive Neptunes sound, came with N.O.R.E.'s Superthug in 1998, reaching #36 on the Billboard Hot 100, and gaining them widespread attention for the first time. The duo then went on to work heavily with Kelis, producing her first album Kaleidoscope and Ol' Dirty Bastard's record Got Your Money, on which Kelis is featured. They achieved huge commercial success with tracks like Jay-Z's "I Just Wanna Love U (Give It 2 Me)", Mystikal's "Shake Ya Ass", and then-newly-renamed Diddy's single "D.I.D.D.Y". Other notable hits during their commercial rise were Busta Rhymes' "Pass The Courvoisier pt. 2" and Usher's "You Don't Have to Call".

Kelis was one of several artists whose careers Hugo and Williams have helped launch; artists such as the Clipse, Vanessa Marquez and Justin Timberlake's solo career were also closely tied to the Neptunes' involvement. They have also helped re-launch the careers of Snoop Dogg, Robin Thicke and Mystikal.

In 2001 The Neptunes gained their first worldwide hit with Britney Spears' single, "I'm A Slave 4 U", which reached #1 in several countries in Europe and South America. The following year they reached #1 in the U.S. with Nelly's single, "Hot in Herre". In August of the same year, The Neptunes were named "Producers of the Year" at both The Source Awards and the Billboard Music Awards.

In 2003, they released a self-credited album called The Neptunes Present… Clones, featuring songs and remixes from various Star Trak artists. This album topped the US Billboard 200 Albums Chart.

The Neptunes went home with two Grammy Awards in 2004, one for "Producer of the Year, Non-Classical", and another for "Best Pop Vocal Album" for their work on Justin Timberlake's No.2 Billboard hit Justified. They also gained their first UK #1, again with Nelly, and Flap Your Wings.

A survey in August 2003 found the Neptunes produced almost 20% of songs played on British radio. A similar survey in the US had them at 43%. This level of radio domination is unprecedented in recent years, and highlights the effect they have had on music and production development in this era.

Their 'sound' is mostly synthesizer riffs, Sampling Keyboard and modules. The Neptunes sound was first heard on Noreaga's 1998 track Superthug, although not their first production, the song made it officially known as "The Neptunes Sound".

A Neptunes production is typically characterized by flat, punchy drum machine sounds and the use of module presets. "Grindin'" was a drum track that paid tribute to Eric B. & Rakim's song of the same nature, "My Melody". Justin Timberlake's "Like I Love You" paid tribute to the drums of the funk era, where the loop consisted of various snare sounds. On Busta Rhymes' "Light Yo Ass On Fire" they used a heavy chorus effect on the rhythm track suggesting an industrial or robotic theme. They have used the popular Roland TR-808 drum sound on such songs such as LL Cool J's and Jamie Foxx's collaboration "Best Dress" but later production work introduced 'live' drum sounds similar to the ones they would frequently use under their N*E*R*D guise.

The Neptunes' engineer, in an interview with Sound on Sound magazine, revealed many of their production techniques. In reference to their drums he said, "Williams will play a standard drum kit, then I will cut 16 bars of it into a loop, before using the same method for other instruments including guitars. That's where a lot of the feel of their records comes from — it's not just machines and loops."

Many Neptunes productions feature a hook with Pharrell singing falsetto, including Jay-Z's "Excuse Me Miss", Jadakiss' "Hot Sauce To Go", Kelis' "Flashback", and Snoop Dogg's "Beautiful". Pharrell also adds his own rhymes to his productions, including "Drop It Like It's Hot" in 2004 and "Can I Have It Like That" from his solo debut album In My Mind. Sometimes he is credited as a featured artist and other times he is not.

Another signature sound found on Neptunes productions are their distinctive use of synth lines. Examples include the sharp unfiltered sawtooth bass on Busta Rhymes' As I Come Back or Kelis' Milkshake, the heavily phased strings in Jay-Z's "Excuse Me Miss (Remix)", and hard clavi sounds which is used in N.E.R.D's "Lapdance" reminiscent of those associated with rayguns or video game sound effects from the 8-bit era. The synthesizers they use include a MicroKorg, and a Minimoog Voyager.

There has been much speculation about their tools of the trade. For sequencing they use the Korg 01/W, for drum sounds they use the sampling keyboard Ensoniq ASR-10, their sound modules include the Roland JV 1080 and JV 2080 and for basslines and filtering they have used the MicroKorg. They are also well known for using the Korg Triton and incorporating live percussion and acoustic instruments into their music.

The alternative group N*E*R*D is composed of Pharrell, Chad and Shay Haley. It is an acronym of No one Ever Really Dies. Their group hits include "Lapdance", "Rock Star (Poser)" and "She Wants To Move". The first two singles came from their debut album In Search Of… released in 2001, while the latter came from their eagerly anticipated follow-up Fly Or Die in 2004. The band recently released a third album, Seeing Sounds, on June 10 2008.

Pharrell as a solo artist

In 2003, Pharrell released his first solo single, Frontin' featuring Jay-Z. At the time he claimed it was a one-off song, and that he was not a singer in his own right. However, after several delays, Pharrell released his debut solo album on July 24 , 2006, titled "In My Mind". The first single from the album was a collaboration with Gwen Stefani titled "Can I Have It Like That", released in 2005. The album features numerous guests, including Jay-Z, Snoop Dogg, Nelly, Slim Thug, and Kanye West.

In recent years, Pharrell and Hugo have written many beats separately on different projects, despite production still being credited to The Neptunes in all cases except Pharrell's solo debut In My Mind and Hugo's work on Kenna's New Sacred Cow. Notable examples include the Clipse's 2006 release Hell Hath No Fury, where Pharrell is the only member of the duo who receives writing credits, as well as N.E.R.D.'s 2008 album Seeing Sounds, where nine songs are written solely by Pharrell and 3 are written by both Pharrell and Chad (Hugo received credits for additional keyboards and horns). Hugo, meanwhile, co-wrote the majority of Kenna's 2007 album Make Sure They See My Face, with the exception of two songs co-written by Pharrell and two written by Kenna alone. Basic speculation has to do with the fact that Pharrell now resides in Miami and Chad still resides in Virginia, but according to Pharrell, the two are very much still a team, despite recent allegations that the duo were splitting ways back in October 2008. The most recent project to receive substantial writing input from both Pharrell and Hugo was Common's Universal Mind Control in December 2008 and for 2009 a list of songs to look forward to.