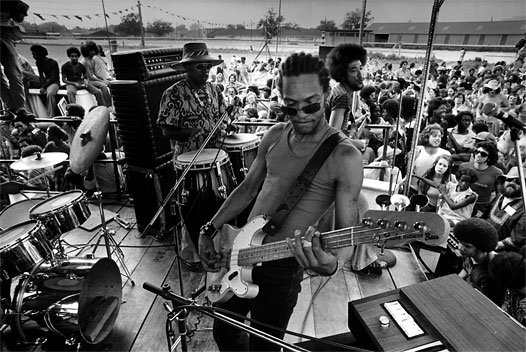 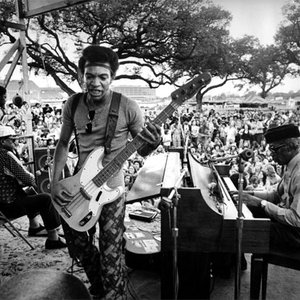 The Meters are an American funk band formed in 1965 by Zigaboo Modeliste (drums), George Porter Jr. (bass), Leo Nocentelli (guitar), and Art Neville (keyboards) in New Orleans. The band performed and recorded their own music from the late 1960s until 1977 and played an influential role as backing musicians for other artists, including Lee Dorsey, Robert Palmer, Dr. John, and Allen Toussaint. Their original songs "Cissy Strut" and "Look-Ka Py Py" are considered funk classics.

While they rarely enjoyed significant mainstream success, they are considered originators of funk along with artists like James Brown, and their work is influential on many other bands, both their contemporaries and modern musicians. Their sound is defined by a combination of tight melodic grooves and syncopated New Orleans "second line" rhythms under highly charged guitar and keyboard riffing. The band has been nominated four times for induction into the Rock and Roll Hall of Fame, most recently in 2017. In 2018 the band was presented the Grammy Lifetime Achievement Award.

The Meters were a band that performed and recorded from the late 1960s until 1977. They were based in New Orleans. While the band never enjoyed huge popular success, it was nonetheless greatly admired by cognoscenti and is considered one of progenitors of funk in the 1970s.

The Meters formed in 1965, with a line up of keyboardist and vocalist Art Neville, guitarist Leo Nocentelli, bassist George Porter Jr. and drummer Zigaboo Modeliste, and became the house band for Sansu Enterprises, an Allen Toussaint-owned label. In 1969, the Meters released "Sophisticated Cissy" and "Cissy Strut", both major R&B chart hits; "Look-Ka Py Py" and "Chicken Strut" were also hits the following year. After a label shift in 1972, the Meters had difficulty returning to the charts, though they played on many important records by Dr. John, Paul McCartney, King Biscuit Boy, Labelle and Robert Palmer. The band broke up in 1977 after Toussaint claimed the rights to the name and they played as various incarnations of the Neville Brothers and with other bands. In 1989, The Meters reformed with the new official name, The Funky Meters, after an informal jam during the New Orleans Jazz & Heritage Festival.

Original drummer Ziggy Modeliste, who started out with the group as a 17-year-old, laid down some very influential rhythms. His beats have been sampled by numerous hip hop groups including Ice Cube, Run DMC, NWA, A Tribe Called Quest, Beastie Boys, Queen Latifah, and EPMD. Modeliste relocated to Oakland, California, in the '80s where he teaches drumming, releases new music, and performs around the San Francisco Bay Area and the world with his band "Zigaboo Modeliste and The New Aahkesstra".

The Meters gained new-found notoriety in 2001, winning a Lifetime Achievement Award at the Jammys. Their music has been used in films and commercials, and in 2005 drum and guitar breaks from their 1970 version of "Oh, Calcutta!" (reinterpreted from the stage musical, and appearing on their "Look-Ka Py Py" album), were sampled by producer Rich Harrison, to provide the main loops of the hit song "1 Thing" by Amerie. A re-engineered version of "Cissy Strut" was released by Butch Cassidy Sound System in 2005

At the 2005 New Orleans Jazz & Heritage Festival the original Meters reformed for a special performance. This went so well that the original group decided to play further dates in Las Vegas, Chicago, San Francisco and New York later in the year, including a benefit for Gulf Coast victims of Hurricane Katrina.

(2) The Meters defined New Orleans funk, not only on their own recordings, but also as the backing band for numerous artists, including many produced by Allen Toussaint. Where the funk of Sly Stone and James Brown was wild, careening, and determinedly urban, the Meters were down-home and earthy. Nearly all of their own recordings were instrumentals, putting the emphasis on the organic and complex rhythms. The syncopated, layered percussion intertwined with the gritty grooves of the guitar and organ, creating a distinctive sound that earned a small, devoted cult during the '70s, including musicians like Paul McCartney and Robert Palmer, both of whom used the group as a backing band for recording. Despite their reputation as an extraordinary live band, the Meters never broke into the mainstream, but their sound provided the basis for much of the funk and hip-hop of the '80s and '90s.

Throughout their career, the Meters were always led by Art Neville (keyboard, vocals), one of the leading figures of the New Orleans musical community. As a teenager in high school, he recorded the seminal "Mardi Gras Mambo" with his group, the Hawketts, for Chess Records. The exposure with the Hawketts led to solo contracts with Specialty and Instant, where he released a handful of singles that became regional hits in the early '60s. Around 1966, he formed Art Neville & the Sounds with his brothers Aaron and Charles (both vocals), guitarist Leo Nocentelli, drummer Joseph "Zigaboo" Modeliste, and bassist George Porter. The band grew out of informal jam sessions the musicians held in local New Orleans nightclubs. After spending a few months playing under the Sounds name, producer Allen Toussaint and Marshall Sehorn hired the group – without the vocalists – to be the house band for their label Sansu Enterprises.

As the house band for Sansu, the Meters played on records by Earl King, Lee Dorsey, Chris Kenner, and Betty Harris, as well as Toussaint himself. They also performed and recorded on their own, releasing danceable instrumental singles on Josie Records. "Sophisticated Cissy" and "Cissy Strut" became Top Ten R&B hits in the spring of 1969, followed by the number 11 hits "Look-Ka Py Py" and "Chicken Strut" a year later. The Meters stayed at Josie until 1972, and during that entire time they reached the R&B Top 50 consistently, usually placing within the Top 40. In 1972, the group moved to Reprise Records, yet they didn't sever their ties with Sansu, electing to keep Toussaint as their producer and Sehon as their manager. Ironically, the Meters didn't have nearly as many hit singles at Reprise, yet their profile remained remarkably high. If anything, the group became hipper, performing on records by Robert Palmer, Dr. John, LaBelle, King Biscuit Boy, and Paul McCartney. By the release of 1975's Fire on the Bayou, the Meters had a Top 40 hit with Rejuvenation's "Hey Pocky A-Way" (1974), and they had gained a significant following among rock audience and critics. Fire on the Bayou received significant praise, and the group opened for the Rolling Stones on the British band's 1975 and 1976 tours.

During 1975, the Meters embarked on the Wild Tchoupitoulas project with Art's uncle and cousin George and Amos Landry, two members of the Mardi Gras ceremonial black Indian tribe, the Wild Tchoupitoulas. The Meters, the Landrys, and the Neville brothers – Aaron, Charles, Art, and Cyril – were all involved in the recording of the album, which received enthusiastic reviews upon its release in 1976. Cyril joined the Meters after the record's release. Despite all of the acclaim for The Wild Tchoupitoulas, its adventurous tendencies indicated that the group was feeling constrained by its signature sound. Such suspicions were confirmed the following year, when they separated from Toussaint and Sehorn, claiming they needed to take control of their artistic direction. Following the split, the Meters released New Directions in 1977, but shortly after its appearance, Toussaint and Sehorn claimed the rights to the group's name. Instead of fighting, the band broke up, with Art and Cyril forming the Neville Brothers with Aaron and Charles, while the remaining trio became session musicians in New Orleans. Modeliste, in particular, became a well-known professional musician, touring with the New Barbarians in 1979 and moving to L.A. during the '80s.

The Meters reunited as a touring unit in 1990 with Russell Batiste taking over the drum duties from Modeliste. Four years later, Nocentelli left the band, allegedly because he and Art disagreed whether the band should be paid for samples hip-hop groups took from their old records; he was replaced by Brian Stoltz, who had played with the Neville Brothers. The Meters continued to tour throughout the '90s. ~ Stephen Thomas Erlewine, Rovi