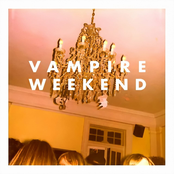 One (Blake's Got a New Face)

Boyhood (Music from the Motion Picture)

"One (Blake's Got a New Face)" is the eighth track off of Vampire Weekend's self-titled debut album. “Well, I had the melody long before the lyrics,” Ezra Koenig, Vampire Weekend’s lead singer, explained. “And we had all sorts of stupid stuff that we were considering. And then I met this friend of my girlfriend’s named Blake, someone she went to high school with, and it kind of just popped into my head after meeting him. So there is an actual person named Blake.” - via Rolling Stone