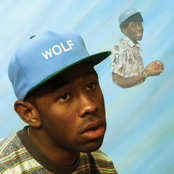 “Domo23” is the first single from Tyler, The Creator’s album, Wolf, which was released April 2, 2013. The song, along with its accompanying music video, was released on February 14, 2013. Why Tyler chose to call the track “Domo23”: “thats the name of the beat when i made it, and i never changed it haha”