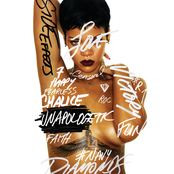 I've been ignoring this big lump in my throat
I shouldn't be crying, tears were for the weaker days
I'm stronger, now what, so I say
But something's missing

I found the one, he changed my life
But was it me that changed
And he just happened to come at the right time
I'm supposed to be in love
But I'm numb again

There's no one to call cause I'm just playing games with them all
The more I swear I'm happy, the more that I'm feeling alone
Cause I spent every hour just going through the motions
I can't even get the emotions to come out
Dry as a bone, but I just wanna shout

"What Now" is a song recorded by Barbadian singer Rihanna for her seventh studio album, Unapologetic (2012). It was written by Olivia Waithe and Rihanna alongside the song's producers, Parker Ighile and Nathan Cassells. A remix collection was released exclusively to Beatport on August 29, 2013[1] and later being released via iTunes, Amazon, and Google Play on September 17, 2013, respectively.[2][3][4] The single was serviced to US rhythmic radio on September 24, 2013 before impacting on mainstream radio on October 1, 2013 as the sixth single from Unapologetic. Another remix collection was released to Beatport on October 29, 2013.[5] The song is a mid-tempo piano ballad which incorporates sounds which resemble "sonic bombs" during the chorus and "crashing" drums. It received generally positive reviews, with many critics calling it an emotional, stand-out song on the album and praised Rihanna's vocals. Following the release of Unapologetic, "What Now" made chart appearances on the French Singles Chart and UK Singles Chart, as well as the UK R&B Chart where it peaked at number 32. The single also peaked at number 25 on the US Billboard Hot 100 and at number 27 on the Canadian Hot 100 charts. To promote the song, Rihanna performed on Alan Carr: Chatty Man and the song is included on the set list of her Diamonds World Tour (2013).[6] Jeff Nicholas, Jonathan Craven, and Darren Craig from Uprising Creativity directed the song's music video, which portrays Rihanna having an "emotional breakdown" and performing exorcism-type dance moves. Critics complimented the video and compared it to Rihanna's 2008 video for the song "Disturbia".