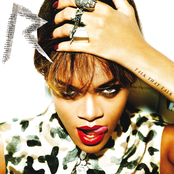 [Video Intro: Agyness Deyn]
It's like you're screaming, and no one can hear
You almost feel ashamed, that someone could be that important
That without them, you feel like nothing
No one will ever understand how much it hurts
You feel hopeless, like nothing can save you
And when its over and it's gone
You almost wish you could have all that bad stuff back
So that you could have the good

[Verse 1: Rihanna]
Yellow diamonds in the light
And we're standing side by side
As your shadow crosses mine
What it takes to come alive

The We Found Love Songfacts says: Following a stint as her support act on the Australian leg of her tour, Calvin Harris was asked by Rihanna to write a song for her next album. After she turned down several attempts by the Scottish electro wiz, she finally agreed to record this track. We Found Love features Scottish singer-songwriter Calvin Harris it is a dance-pop and electropop song, with elements of other musical genres, including dubstep and electro house. Released in September 2011. It reached number one in its sixth week on the BillboardHot100, giving Rihanna the record for a solo artist to have amassed twenty top-ten singles in the history of the Billboard Hot 100 in the shortest amount of time and Harris his first number-one single. With the song becoming the singer's eleventh number one single, Rihanna has become only the seventh artist in the 53 year history of the chart to amass at least eleven number one singles, as well as tying her with Whitney Houston in third place for females with the most number one singles, behind only Madonna (12) and Mariah Carey (18). The song has also peaked at 1 on both US Hot Dance Club Songs and Pop Songs charts. Elsewhere, "We Found Love" peaked at number one in New Zealand, Denmark, France, Canada, Ireland, Sweden, Finland, Norway, Germany, Switzerland and the United Kingdom, and has attained top-five positions in Australia, Italy, Spain, the Netherlands, Belgium and South Korea. The song's accompanying music video was directed by Melina Matsoukas and presents Rihanna's relationship with her boyfriend as being like a drug and how their addiction to each other results in the singer leaving her boyfriend because of his possessive nature. The video received a mixed response from critics, and they noted that the video strongly alludes to ex-boyfriend Chris Brown's assault on Rihanna.