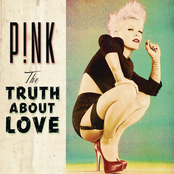 The Truth About Love

“Try” is a song recorded by American singer/songwriter P!nk, which she released as the second single from her sixth studio album, The Truth About Love (2012). Written and composed by Michael Busbee and Ben West and produced by Greg Kurstin, it is a pop rock ballad about taking risks with love, no matter what consequences may result.