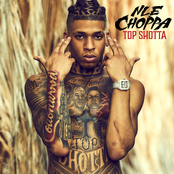 [Verse 1: NLE Choppa]
Ayy, put the beam on my Glock for my accuracy (Yeah)
Bitch, you know that I'm tough like a refugee (CashMoneyAP, yeah)
Boy, you know you get dead if you step to me (Brrt)
I was only fifteen with a felony (Yeah, yeah)
Whole lotta opps so the party got wrecked (Ayy)
Big ass Crip, but it's blood on the set (Ayy)
Call the Glock Nike, put a nigga in check (Ayy)
How he gon' breathe when I shot him in the neck? (Ayy)
Yeah, the opps stay famous, I put 'em on TV
It's a house on my neck and it's filled with VV's (Bitch)
I walked down on him and he didn't even see me (Bitch)
Hollow tips in this Glock, this shit is not BBs (Yeah)
I'm the only rapper that's down for a body (Down for a body)
I don't need the drugs, I don't need no molly (I don't need molly)
Bitch, I'm EBK, I'll shoot everybody (Brrt, brrt)
Always got the gun, it's glued to my body
Shoot him in the hip if he turn into a runner (Ayy)
Gun in the purse like a nigga named Gunna (Ayy)
Catch him on the E-way, I'ma flip the whole Honda (Ayy)
African shooters, I call 'em Wakanda (Yeah, yeah)
If he wanna do it, tell him I'm ready (I'm ready)
Knock out his brains, it look like spaghetti (Look like spaghetti)
Shoot at the opps like Corey Maggette (Yeah)
Bitch, I'm Don Dada, my hair be dreaded (Hold up)
Hold up, on a Perc' in this motherfucker
Niggas get dirt in the motherfucker
Get put on a shirt in this motherfucker
If a nigga want smoke, if these niggas want smoke
I'ma get his ass hurt in this motherfucker
Big Drac' when I slide in the motherfucker (When I slide in the motherfucker)
Nigga play, he dyin' in this motherfucker (He dyin' in this motherfucker)
If a nigga really want that shit, he can get that shit
Got the Glock on the hip, I'ma shoot that bitch (Dumbass)
AR-15 with the 5.56
If a nigga want smoke, he gon' get dismissed (Bitch)
I don't even got a car, hundred K Audemar
You can see it on my wrist when the bitch glis'
Aim got better, I'm not gon' miss
Why the fuck you got a gun and you know you a bitch? Ayy
Bitch, it's too deep, don't get in this water (Bitch)
If we can't find him, we shoot at his daughter (Brrt)
I see that hate, but you know I go harder (Yeah)
Bitch, you my son, you know I'm a father (What?)
Lil' demon, you can call me a gremlin (Huh?)
I want the smoke like a motherfuckin' chimney (Like a chimney)
You get shot in your mouth if you grinnin' (Bitch)
Shotta Fam, extortion, we winnin'
Your homie a bitch, you can keep him (He a bitch)
My shooter'll die like Latifah (He dead)
Take a look in my eyes, I'm the reaper (Bitch)
Bitch, I really don't fuck with them people (I don't fuck with them people)
And it can be on Judgement Day with God, I bust at them people (I'm sorry, Lord)
Bitch, you know I'm gon' shoot when I see you
If I was you, I wouldn't want to be you (I wouldn't wanna be you), yeah, yeah
Leave him unrecognized when I do a homi' (Ayy)
Get in a jam and you turn into a gummy (Ayy)
Slammin' on the opps like a nigga Tim Duncan (Ayy, ayy)
I'ma come with a gun, I call it conjunction (Ayy)
Bitch shakin' ass, what the fuck is you doin'? (What you doin'?)
I ain't chasin' hoes, but you know I'm pursuin'
I'm fuckin' two hoes, I do it congruent (Congruent)
If you diss on my name, your life get ruined
Shoot him in the back, take him out like Ricky (Huh?)
Don't come too close 'cause I'm clutching my blicky
Got a Glock 26 and it came with a titty (Brrt, brrt)
No Biggie, with the chopper, get to boppin' like Diddy (Brrt, brrt)
Bitch, you not robbin' shit and I put that on Buddha
I used to be fine then I turned to the shooter
Extended the mag, it look a ruler (Ayy, brrt, brrt)
I didn't wanna kill him, but I had to do him
We on the opps' ass, man, they want us to let up (They wanna let up)
White tee turned red, they thought I hit him with some ketchup (Hit him with some ketchup)
The body count keep risin', I done turned into the devil (Turned into the devil)
They know how we be slidin', bitch, I had to cop a rental (I copped the rental)