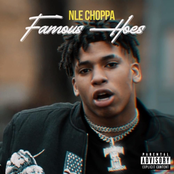 [Chorus]
Get a bitch and make her famous, next minute she block me
Thirty in this Perky, need to slow down on the Roxys
Got a call, my nigga died, I damn near skipped a heartbeat
Lookin' for your love, but your feelings is departing
Pull up on the wrong street, you niggas getting blicked out
Gun up in my hand while I fuck her with my dick out
We was really in the trenches, thuggin' in the Choppa house
Don't you tell me that it's smoke, because you know that we gon' bang it out

[Verse]
I don't even know which car I'ma drive (Drive)
Roll a three-five, now I'm too damn high (I'm too damn high)
Bitch, I'm in my zone, don't you kill my vibe (Don't you kill my vibe)
If a nigga play, you know them choppers gon' ride
That micro Draco clip, it look like a banana (Like a banana)
A nigga look wrong in this bitch, we gonna blam him (Grr, grr, grr, grr, grr)
A lot of choppers when we ride, raise the count up (Raise the count up)
I robbed the corner store, the gun over the counter
And I ain't gotta spin back because I know he dead
Ain't no surviving when you shoot a nigga right in his head
Paramedics asking questions 'bout that boy and the meds
But they know he ain't gon' make it, so they pronounced him dead