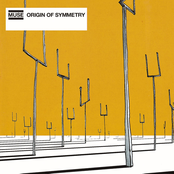 Link it to the world
Link it to yourself
Stretch it like a birth squeeze
The love for what you hide
For bitterness inside
Is growing like the new born
When you've seen, seen too much
Too young, young

Soulless is everywhere
Hopeless time to roam
The distance to your home
Fades away to nowhere
How much are you worth?
You can't come down to earth
You're swelling up
You're unstoppable
'Cause you've seen
Seen too much
And too young, young

Yeah, link it to the world
Link it to yourself
Stretch it like it's a birth squeeze
And the love for what you hide
And the bitterness inside
Is growing like the new born
When you've seen, seen too much
Too young, young

"New Born" is a song by the English band Muse available on the eponymous single, the album Origin of Symmetry, the live album HAARP and on the Hullabaloo Live DVD. The main piano melody is based on broken chords, a technique used in numerous other Muse songs, such as "Sunburn" and "Bliss". The band is known for performing modified, more elaborate versions of the song when playing live. In particular, Matt Bellamy now plays a slightly re-worked piano part during the intro, and substitutes the tremolo technique used in the solo for tapping. At the end of the song, Bellamy plays a riff from Rage Against the Machine's cover of "Microphone Fiend" or Deftones "Headup". Matthew Bellamy said of the song: "It's about a semi-fear of the evolution of technology, and how in reality it's destroying all humanity. My fear is that we can't control it because it's moving faster than we are, so the songs setting myself in a location in the future where the body is no longer important and everyone's plugged into a network. The opening line is 'link it to the world', so it's connecting yourself on a worldwide scale and being born into another reality." The song was also remixed by Paul Oakenfold for the movie Swordfish, although it doesn't appear in the movie, it appears on the soundtrack. Chris Wolstenholme said: "New Born I think between the three of us is probably one of our favourite tracks off Origin of Symmetry. It is a good live track. I think it's one of the songs which showcases the experimental side of the band. It is not really a conventional pop song. I think a lot of the reason for choosing these songs is that we went for the heavier more direct kind of songs rather than going for anything too mellow".[citation needed] The song was featured in the film Haute Tension. The B-sides "Shrinking Universe" and "Map of Your Head" were featured on the Hullabaloo Soundtrack in the B-sides collection. The song was "performed" on Live & Kicking, but due to the BBC producers not allowing the band to perform live, Matthew Bellamy waved his hands around instead of playing the keyboard. Chris Wolstenholme (bass) and Dom Howard (drums and percussion) swapped instruments for this mime performance.

Related Tracks
Muse - Bliss
Muse - Space Dementia
The White Stripes - Seven Nation Army
Placebo - Meds
Placebo - The Bitter End
Radiohead - Paranoid Android
Radiohead - Karma Police
Jimmy Eat World - Pain
Pixies - Where Is My Mind?
The White Stripes - Fell in Love With a Girl
My Chemical Romance - The Sharpest Lives
The Raconteurs - Steady, as She Goes
Nothing But Thieves - trip switch
Jet - Are You Gonna Be My Girl
Weezer - Island in the Sun
R.E.M. - Losing My Religion
Weezer - Say It Ain't So
Kongos - Come With Me Now
Jimmy Eat World - The Middle
Blue October - Say It
Pixies - Hey
Bloodhound Gang - The Ballad Of Chasey Lain
Three Days Grace - I Hate Everything About You
Breaking Benjamin - The Diary of Jane
A Perfect Circle - The Outsider