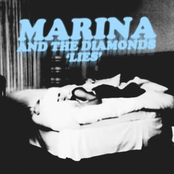 [Pre-Chorus]
You're too proud to say that you made a mistake
You're a coward till the end
I don't wanna admit that we're not gonna fit
No, I'm not the type that you like
Why don't we just pretend?

[Verse 2]
You only ever touch me in the dark
Only if we're drinking can you see my spark
And only in the evening could you give yourself to me
'Cause the night is your woman, and she'll set you free

Lies is a song by Marina Diamandis, released under her previous stage name 'Marina and the Diamonds'. Appearing on her second studio album, Electra Heart, it is the 3rd track on the album. The song was written by Marina, Dr. Luke, Cirkut and Diplo, and produced by Dr. Luke and Cirkut with co-production by Diplo. Lies was used as Part 10 of 'The Archetypes', and is a 'Housewife' song, along with Su-Barbie-A, and Valley of the Dolls. In May 2011, Dr Luke tweeted: "@MarinasDiamonds singing in the booth !!!! me likey !!!" This could only be for Lies, as Primadonna wasn't written until October, and How to Be a Heartbreaker even later. Lies was the first song Marina wrote with Dr Luke, and said it made her understand the process of co-writing, because she had the verse for a long time and he had something which fit together, a demo with a heavily autotuned Dr. Luke leaked in 2021, this is likely to be the writing demo of Lies. Noticeably, the album sampler version of the song has a longer instrumental bridge. For her Conan live performance, and on the final leg of The Lonely Hearts Club Tour Marina sung a bridge, suggesting that she didn't have the lyrics in time for the album release causing it to be made shorter. Diamandis deemed Lies as a "personal record" about a boy who was a coward and for whom she had no respect. She was angry about what happened between them so she wrote "Lies" as a form of release. Half of the track was written in the home of Bruce Springsteen while the verse was written after a gig in Stone Pony, New Jersey.