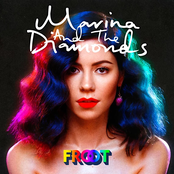 [Interlude 1]
It's summer time and I hang on the vine
They're gonna make me into sweet red wine
Hanging around like a fruit on a tree
Waiting to be picked, come on cut me free

[Pre-Chorus 1]
Come on fill your cup up
Looking for some good luck
Good luck, good luck to you
Hanging like a fruit
Ready to be juiced
Juiced, juiced

"Froot" is a song by Welsh singer Marina Diamandis, at the time known professionally as Marina and the Diamonds. It was released for streaming on 10 October 2014, to coincide with the singer's birthday, and later received a full digital release as the lead single off of her third studio album, Froot. The song was written by Marina alone, and produced by David Kosten. Froot was represented by a grape vine in the 'Froot of the Month' campaign, and paired alongside Can't Pin Me Down on Marina's website during the era. Marina stated Froot is "a very positive song" about happiness, readiness to love, and "living the best life that you can", an idea never talked about in her past music. Most assume the song is about somebody ready to lose their virginity, however, Diamandis stated: "I think a lot of people assume it's about sex, but it's not. Strictly. Most of it is not. It's really about being ready for happiness, and being ready to love somebody, and being fully-realised as a person. I like that it's a really positive message to start on. I needed that. It would've been easy to go with something like Happy, which is a ballad and kind of stripping everything back to its bare bones, and I felt like that would be predictable."