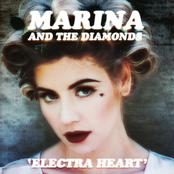 "Bubblegum Bitch" is the opening track to Marina's 2012 sophomore album, "Electra Heart." At the time of the album's release, Marina went by the stage name 'Marina & The Diamonds', she disposed of the '& The Diamonds' in 2018 however. The song was written by Marina and Rick Nowels, and produced by Nowels with co-production by Dean Reid. Bubblegum Bitch is a 'Teen Idle' song, along with Teen Idle, and Radioactive. The song was written on June 5, 2011, with Rick Nowels, in Santa Monica, California.The song's verses took ten minutes to write, though they were collected over a period of three months. Rick Nowels reflected back on the writing process in 2021: "We were in the kitchen having lunch. Somehow the subject of bubblegum came up. We decided we had to write a song called “Bubblegum Bitch" To me this is high art." Speaking about the song in a promotional track-by-track interview, she said it was "maybe" her favourite track off Electra Heart, describing it as a "fun, sassy song" that was very satisfying to write. Later saying it was in a trio of songs, along with Homewrecker and Primadonna, that were about being the "aggressor" and the "slayer instead of the slain." The track regained popularity in 2021 due to TikTok and became the third song from Electra Heart to be certified RIAA gold on March 26th. Co-writer and producer Rick Nowels called its certification "recognition of fine art" and one of his favourites. It is her most streamed song on Spotify, and one of three songs to have over 200m streams. Bubblegum Bitch is the only album song to contain the name "Electra Heart" and only one of three Electra Heart era songs, the other two being the titular track Electra Heart and The Archetypes.