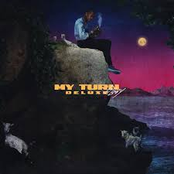 My Turn (Deluxe / Audio Only)

Lil Baby - All In

[Verse 1]
My mama been told me don't give no poor performance
And whatever you gon' do, just do it
Never thought 'bout doin' music
I was tryna build my phone up
Contacts full of drug abusers
Ridin' around with that Mexican, tryna figure out what my cousin doin'
Prison with the 'migos, found out they was sellin' bricks
Wish I would've knew that shit, I would've been lit
Swear to God, since I was seventeen, I been hood rich
I be at James Harden house, I'm all in Houston in the mix
I'm talkin' 'bout spare time in New York, I buy floor seats to watch the Knicks
And I don't even know no players
I just wan' show off my new drip and put my chains in layers
I might just stand up and go crazy, someone make the layup
And we ain't squashin' shit for free, you niggas gotta pay us
You niggas better pay up, yeah
Know he might not beat it, I told the lawyer go for a lighter sentence
I don't want know no problems with y'all niggas, y'all got women tendencies
I don't gotta sell drugs no more, I'm bossed up, I got plenty business
Ridin' 'round in that Lam' truck, I wreck this bitch, it ain't rented
Givin' out my respect, get respect in every city
Niggas know I came up, but I came back through the slums with Diddy
Fucked around and got plugged in, I'm buyin' that red Richard Mille
Stay out my lil' brother business, just know that they gettin' millions