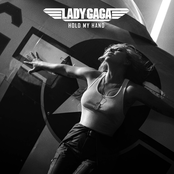 "Hold My Hand" is a song by American singer Lady Gaga, released May 3, 2022 by Interscope. It is the lead single from Top Gun: Maverick (Music from the Motion Picture). The song was written and produced by Gaga and BloodPop as "a love letter to the world during and after a very hard time". Benjamin Rice received additional production credits. "Hold My Hand" has been described by music and film critics as a "hopeful, anthemic" arena rock power ballad. Jazz Tangcay of Variety called "Hold My Hand" a "soaring rock tune with violins and guitar licks that harken back to the power ballads of the '80s." Its lyrics sees Gaga reassuring someone that she will always be there for them "without question." Lars Brandle of Billboard noted that the song has a close lineage to Berlin's "Take My Breath Away" and Kenny Loggins' "Danger Zone", two tracks from the soundtrack of the original Top Gun film. Music critics from other outlets compared "Hold My Hand" to songs such as "Open Arms" by Journey, "Alone" by Heart, and Gaga's own 2011 single, "The Edge of Glory". The song was originally published in the key of G major and starts with G/D/C/G/D chord progression with three intro bars before singer starts to sing with the lyrics "Hold my hand, every thing will be okay, I heard from the heavens that clouds have been grey. Pull me close, wrap me in your arching arms". Robin Murray of Clash called the song "a triumph of bombast" which "finds Lady Gaga cutting loose as a vocalist". Stuart Heritage of The Guardian thought that the song is "bombastic and emotional, and includes everything you could possibly want from a Lady Gaga power ballad". Variety's Jazz Tangcay found the song a "catchy earworm" with a "strong guitar solo", and argued that it is "on track to being an Oscar frontrunner in the original song race." Vulture, an online blog associated with New York opined that "Hold My Hand" is an "outlier in Gaga's catalogue" as "this is one of her only pop songs with zero subversive elements", while noting that "the song’s sheer level of self-determination is quintessential Gaga. It feels like a sincere attempt to write the most inspiring end-credits ballad of all time." Alexa Camp of Slant Magazine was more negative in her review, thinking that "for a song the artist claims she's been perfecting 'for years', 'Hold My Hand' struggles to take flight."