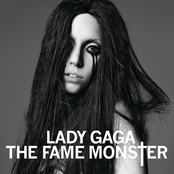 "Bad Romance" is the lead single from her third EP The Fame Monster. The track was produced by RedOne and was inspired by the 'Love Monster' that she had faced while touring through the previous year. Gaga was quoted saying 'It's a song about being in love with your best friend.' According to the Bad Romance Songfacts, when this reached #1 in the UK, Lady Gaga became the first solo female artist to have three chart-toppers in a calendar year. After the demo version of the song leaked, Gaga premiered the song at Alexander McQueen's Spring/Summer 2010 Paris Fashion Week show on October 6, 2009, followed by the release of the cover art. The song was officially released as a single on October 25, 2009. Composed in a similar tempo to her previous singles, Bad Romance features a sing-and-tell bridge and a full-mouthed chorus. The song talks about exploring the joys of a bad romance while referencing Alfred Hitchcock's films in some of the verses. In the US, "Bad Romance" debuted at number nine on the Billboard Hot 100 on November 14, 2009, with 143,000 digital downloads. After two weeks, the song reached number two, holding the spot for seven non-consecutive weeks. It was barred from the top position by Jay-Z's "Empire State of Mind" (featuring Alicia Keys) and later Kesha's "Tik Tok" (both 2009). The movement to number two was first prompted by a 49% digital gain, which led to the song's top spot on the Hot Digital Songs chart. As of February 2019, "Bad Romance" has sold 5.9 million copies in the US, according to Nielsen Soundscan, making Gaga the second artist after Katy Perry to have three singles—along with "Just Dance" and "Poker Face"—each selling five million digital copies. After the Recording Industry Association of America (RIAA) started including video streams in their tabulation of the single certifications, "Bad Romance" was certified 11× platinum for 11 million in sales and streaming. According to Nielsen Broadcast Data Systems, it briefly set the record for most weekly plays in the 17-year history of the Pop Songs chart, registering 10,859 plays from 130 radio stations monitored for the chart. Following Gaga's Super Bowl LI halftime show performance in 2017, "Bad Romance" re-entered the Hot 100 at number 50 and Digital Song Sales at number 9. On the Canadian Hot 100, "Bad Romance" debuted at number 58, and reached number one the following week. Replaced by "Tik Tok" for two weeks, "Bad Romance" returned to the top spot on the chart. Music Canada certified "Bad Romance" septuple platinum, denoting download sales of 280,000 copies. On the European Hot 100 Singles chart, "Bad Romance" spent two weeks at number one. It topped the charts in Austria, Denmark, Finland, Germany, Ireland, Sweden, and Norway. In the UK, "Bad Romance" debuted at number 14 on the UK Singles Chart. In December 2009, the song reached the top spot with 72,919 copies sold, making Gaga the first female artist to have three number-one singles in one year. It attained multi-platinum certification from the British Phonographic Industry (BPI). According to the British company Phonographic Performance Limited, the song was the UK's most played in 2010. As of July 2022, "Bad Romance" has sold 1.7 million copies with 84 million streams, making it Gaga's third best-selling single in the UK. "Bad Romance" debuted at number 16 on the ARIA Singles Chart in Australia and at number 33 on the RIANZ Singles Chart in New Zealand. The song was certified quadruple platinum by the Australian Recording Industry Association for shipment of 280,000 copies. The song sold 9.7 million copies worldwide in 2010—making it the second best-selling of the year—and 12 million as of 2018, becoming one of the best-selling singles of all time.