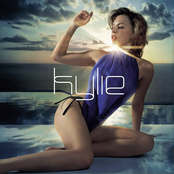 I'm through with the past
Ain't no point in looking back
The future will be
And did I forget to mention that I found a new direction
And it leads back to me?

I've got nothin' left to hide
No reason left to fight
'Cuz the truth's given me a new freedom inside
Gettin' rid of my desire
Do you like what you see?

"Spinning Around" is a song recorded by Australian singer Kylie Minogue for her seventh studio album Light Years (2000). Written by Ira Shickman, Osborne Bingham, Kara DioGuardi, and Paula Abdul, "Spinning Around" was initially meant to be recorded by the latter for her own album, but was given to Minogue after the plan never came to fruition. The disco-influenced dance-pop song was then released as the lead single from Light Years on 13 June 2000. It contains lyrics through which the singer claims that she has changed and is not the same person she was before. Upon its release, "Spinning Around" received favourable reviews from music critics, who singled it out as one of the highlights from the album and praised Minogue for returning to her signature musical style. Commercially, the song was a success and became Minogue's "comeback" single following the critical and commercial disappointment of her sixth studio album Impossible Princess (1997). It entered the singles chart of Australia at number one, becoming the singer's first chart-topper since "Confide in Me" (1994). The song also debuted at number one in the United Kingdom, where it became her first single to peak atop the chart in a decade. Elsewhere, it reached the top five in Ireland and New Zealand. "Spinning Around" was certified platinum and silver in Australia and the United Kingdom, respectively. The accompanying music video for "Spinning Around" was directed by Dawn Shadforth, and features Minogue dancing and enjoying herself in a disco. It became extremely popular for the gold hotpants she sported in most of the scenes and led to her bottom gaining extensive coverage from the media. The hotpants are considered to be "iconic" and have been displayed in fashion exhibitions Minogue has been subject of. "Spinning Around" has been performed by Minogue during all of her concert tours, with the exception of the Anti Tour. After various discussions, Minogue decided to do what she did "best" and record a simple pop album inspired by disco and Europop, entitled Light Years. "Spinning Around" was included as the opening track of the album and was written by Ira Shickman, Osborne Bingham, Kara DioGuardi and Paula Abdul, and produced by Mike Spencer. Abdul had originally intended to record the song for her own studio album, but later scrapped the plan. The song also turned out to be the first major songwriting project for DioGuardi, who had not been offered any notable projects previously. "Spinning Around" was released as the lead single from the album on 13 June 2000 in Australia, and 19 June in the United Kingdom. Similar to most of the songs from Light Years, "Spinning Around" is a "string-laden" dance-pop track with prominent influences from disco music. According to the sheet music of the song published by BMG Rights Management at Musicnotes.com, it is composed in the key of F# minor and features a moderate tempo of 120 beats per minute. Minogue's vocal range spans from the low note of F3 to the high note of C5. Through the lyrics of the song, Minogue declares that she has changed and learned from her mistakes; it contains lines like "I'm spinning around/Move out of my way [...] I'm not the same" and "Mistakes that I made have given me the strength to really believe." Chris True from AllMusic felt that through the lyrics, Minogue was admitting that releasing Impossible Princess in 1997 was not the right decision made by her. The song became a commercial success. In Australia, the success of "Spinning Around" was such that it was certified gold by the Australian Recording Industry Association (ARIA) prior to its release. On the chart date of 2 July 2000, it debuted at number one on the ARIA Singles Chart and remained on the position for one week. The following week, it dropped off to number five and stayed within the top ten for four consecutive weeks in total. It was Minogue's first number one single in the country since "Confide in Me", which was released six years back. "Spinning Around" charted for a total of 12 weeks and was later certified platinum by the ARIA for shipments of 70,000 units. The song also performed well in New Zealand, entering the RIANZ Singles Chart at number eight and peaking at number two. It spent a total of 17 weeks on the chart and was certified gold by the Recording Industry Association of New Zealand (RIANZ) for sales of 7,500 units. Similarly, it debuted atop the UK Singles Chart on the chart date of 1 July 2000, becoming Minogue's first number one single in a decade. Her previous chart-topping single was "Tears on My Pillow" from her second studio album Enjoy Yourself (1989). In total, "Spinning Around" is Minogue's fifth number one single in the United Kingdom. Minogue became one of the two artists to have a number one single in three consecutive decades, achieving this in the 1980s, 1990s, and 2000s. The other artist to hold this distinction is American recording artist Madonna, whose song "American Pie" topped the UK singles chart in March 2000. "Spinning Around" charted within the top 40 for a total of 11 weeks. The British Phonographic Industry (BPI) certified the song silver for shipments of 200,000 units. "Spinning Around" was deemed a successful "comeback" single for Minogue and helped relaunch her career along with parent album Light Years.

Related Tracks
Kylie Minogue - On a Night Like This
Kylie Minogue - Love at First Sight
Dannii Minogue - I Begin to Wonder
Madonna - Music
Madonna - Sorry
Sophie Ellis-Bextor - Murder on the Dancefloor
Spice Girls - Who Do You Think You Are
Girls Aloud - Something Kinda Ooooh
Janet Jackson - All for You
Girls Aloud - The Loving Kind
Sugababes - Round Round
Sophie Ellis-Bextor - Get Over You
Jennifer Lopez - Waiting for Tonight
Sugababes - Push the Button
Britney Spears - Piece of Me
Gwen Stefani - What You Waiting For?
Dannii Minogue - Put The Needle On It (Radio Version)
Christina Aguilera - Not Myself Tonight
Britney Spears - Gimme More
Janet Jackson - All Nite (Don't Stop)
Spice Girls - Holler
Lady Gaga - Dance in the Dark
Shakira - She Wolf
Lady Gaga - Monster
Christina Aguilera - Dirrty