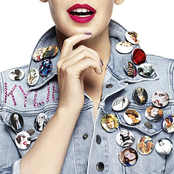 I Believe in You

Kylie Minogue - I Believe in You

And if you ever have to go away
Nothing in my world could ever be the same
Nothing lasts for ever, but together til the end
I'll give you everything I have again and again

"I Believe in You" is a song by Australian singer Kylie Minogue. It was written by Minogue and Scissor Sisters members Jake Shears and Babydaddy and produced by Shears and Babydaddy. It received an overall positive reception from music critics when it was released as the first single from Minogue's second greatest hits compilation, Ultimate Kylie, in December 2004. In this upbeat eurodance song, Minogue describes how she believes in her lover rather than anything else. The single peaked at number two in the United Kingdom and at number six in Australia. The song became a dance club hit in the United States, peaking at number three on the Billboard Hot Dance Club Songs chart in 2005 and earning a nomination for a 2006 Grammy Award in the "Best Dance Recording" category. "I Believe in You" is an upbeat disco love song, which features the use of synthesizers and keyboards. The lyrics of the song, co-written by Minogue, describe how she does not believe in anything except her lover. Written and recorded for Ultimate Kylie during the summer of 2004 in London, not in citation given] the song takes its inspiration from disco and 80s new wave electro-pop music (and has been described as similar to 80s-era New Order). The song opens with a keyboard playing the choral melody. This melody is maintained throughout the song, except for occasional pauses for Minogue's verses. As the song continues, drums and synth strings are added into the background, which continue through the whole song. The refrain features Minogue singing a high octave chorus with strings and a thumping beat in the background. "I love it," Minogue says about the song. "It does everything it's meant to do and then some." The collaboration with Shears and Babydaddy was seen as unlikely by many, including Minogue. "When the idea of working together came up I thought, 'well, I love their album but that is not the music I make'. However, we got on immediately; we were on the same wavelength," she said. "I Believe in You" featured a futuristic music video that was directed by Vernie Yeung. The video features Minogue in a studio filled with colourful neon lights.[1] There are four main sequences; the first two take place in a large sphere enclosed by neon lights, the third is simply Minogue dancing before a psychedelic flash of swirling colours, and the final scene is with a troupe of dancers, each wearing illuminated costumes of different colours. As the video concludes, the four scenes are intercut and gradually fade, including additional shots of the dancers, and Minogue in the second sphere wearing the same clothes and having the same hairstyle as in the first sequence. Minogue wears three costumes during the course of the video, has two different hairstyles, and one sequence shows her with glitter around her eyes. The music video was noted for using high-end visual effects, which were done by Soho-based company The Mill, who enhanced the light bars on the spheres which Minogue is enclosed in. As the video progresses a new sphere is added around Minogue each verse, and a new light for each sphere is added as well. Glow effects were used on the dancers in the fourth sequence of the video to make Minogue stand out. Released to music video channels in November 2004, the video was a hit, charting at number one for three weeks on MTV Europe's top twenty countdown and at number two on the UK TV airplay chart. The complete version of "I Believe in You" featured in the music video has been released commercially through CD singles and digital downloads, and some include remixes by Mylo and Skylark. The video was released commercially on the Ultimate Kylie companion DVD, released in December 2004. Three official remixes were commissioned to promote the song. Mylo created two remixes, the Mylo Vocal and the Mylo Dub, which use the song's original vocals over a new bassline constructed with synthesizers and some electric guitar. The remixes received positive reviews from music critics. About.com stated that the remix provides the song with an "electro trip", commenting that it is "the perfect mix for all the Mixshow DJs out there." Skylark's mix features a kick beat and according to About.com is "more geared toward the clubs" as it is more "underground" than Mylo's remixes. All three remixes were included on the CD single and offered through downloads in December 2004. The remixes achieved chart success in Brazil, where they reached number one on the dance music chart, and in the United States. A radically different version of the song was crafted in 2007 for The Kylie Show, a one-off television program that aired on UK's ITV on 10 November 2007 as a marketing vehicle for her tenth studio album X. The new version changed the song from an up-tempo electronic song into a torch song. This version was also performed by Minogue during her KylieX2008 concert world tour

Related Tracks
Kylie Minogue - On a Night Like This
Kylie Minogue - Better the Devil You Know
Dannii Minogue - I Begin to Wonder
Girls Aloud - The Loving Kind
Madonna - Jump
Sophie Ellis-Bextor - Murder on the Dancefloor
Madonna - Get Together
Girls Aloud - The Show
Sophie Ellis-Bextor - Get Over You
Sugababes - Round Round
Gwen Stefani - What You Waiting For?
Britney Spears - My Prerogative
Sugababes - Hole in the Head
Britney Spears - Do Somethin'
Cher - Believe
Christina Aguilera - Let There Be Love
Kelly Rowland - Commander
Dannii Minogue - Who Do You Love Now
Jennifer Lopez - Play
Janet Jackson - All for You
Kelis - Acapella
Christina Aguilera - Not Myself Tonight
Shakira - She Wolf
Cher - All or Nothing
Robyn - Dancing on My Own