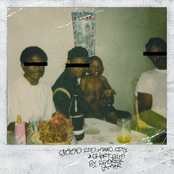 Look inside these walls and you see them having withdrawels
Of a prisoner on his way
Trapped inside your desire
To fire bullets that stray
Track a tire just tell you I’m tired and ran away
I should ask a choir what do you require
To sing a song that acquire me to have faith
As the record spin I should pray
For the record I recognize that I’m easily prey
I got ate alive yesterday
I got animosity building
It’s probably big as a building
Me jumping off of the roof
Is just me playing it safe
But what am I supposed to do
When the topic is red or blue
And you understand that I ain’t
But know I’m accustomed to
Just a couple that look for trouble
And live in the street with rank
No better picture to paint than me walking from bible study
And called his homies because he had said he noticed my face
From a function that tooken place
They was wondering if I bang
Step on my neck and get blood on your Nike checks
I don’t mind because one day you respect
The good kid, M. A. A. D. City

All I see is strobe lights
Blinding me in my hindsight
Finding me by myself
Promise me you can help
In all honesty I got time to be copescetic
And finally made decision to hold me against my will
It was like a head on collision that folded me standing still
I can never pick out the difference
? Or cop on the bill
Every time you clock in the morning
I feel you just want to kill
All my? While ignorning my purpose
To perservere as a better person
I know you heard this and probably in fear
But what am I supposed to do
With the blinking of red and blue
Flash from the top of your roof
And your dog has to say?
And you ask “lift up your shirt”
Cause you wonder if a tattoo
Of affiliation can make it a pleasure to put me through
Gang files, but that don’t matter because the matter is racial profile
I heard them chatter: “He’s probably young but I know that he’s down”
Step on his neck as hard as your bullet proof vest
He don’t mind, he know we never respect
The good kid, M. A. A. D. City

All I see in this room
20 Xanies and?
Grown-up candy for pain
Can we live in the same society
It’s entirely stressful upon my brain
You hired me as a victim
I quietly hope for change
When violence is the rhythm
Inspired me to obtain
The silence in this room
With 20 Xanies and?
Some grown-up candy I lost it
I feel it’s nothing to lose
The streets sure to release the worst side of my best
Don’t mind, cause now you ever in debt
To good kid, M. A. A. D. City

This song kicks off "good kid, m.A.A.d city"’s back half, depicting the immediate aftermath of K.Dot getting jumped by two guys in hoodies at the end of the previous track, “Poetic Justice.” This sets off the album’s theme of realization, ultimately steeling Kendrick’s resolve to get out of the hood. Obviously, that’s easier said than done, as Kendrick delves into the negative effects of gang-culture and being racially profiled by police, who prove to be no help; K.Dot’s trials in the first two verses are reminiscent of Tre’s in the 1991 film Boyz n the Hood, who was harassed by gangsters for being a good kid and police officers for being black. Kendrick notes that while he did not affiliate with either gang, he was wrongly assumed to be involved in Compton gang culture by both sides and the police alike. This is one half of the album’s title tracks, followed by “m.A.A.d city,” which continues this song’s narrative. Also, “good kid” is notable for its absence of profanity. It is one of the only tracks on good kid, m.A.A.d. city with this designation (with the exception of Real and Now or Never on the deluxe edition of the album). Kendrick’s deliberate avoidance of profanity in this song subtly further drives home the story of a good kid who is simply guilty by association. Lamar told Complex in October 2012: "'That represents the space I was in. Knowing that you’re doing wrong things, but at the same time, you’re a good kid at heart. I knew what I was doing and what I was getting myself into and the people I’m hanging with. [Getting in the studio with Pharrell] was insane. We did about five records together. He bangs out beats so quick, it’s amazing. So we was just cutting records. When he played that beat, I knew instantly that was the one I wanted for the title track. Just because of how dramatic it sounds.'"