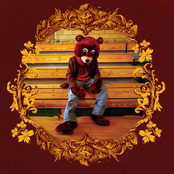 Kanye West - Through the Wire

Yo G they can't stop me from rapping can they?
Can they, huh?

I spit it through the wire man
To much stuff on my heart right now man
I'll gladly risk it all right now
It's a life or death situation man
Y'all don't really understand how I feel right now man
It's your boy Kanye to the....
Chi-Town what's going on man

[Verse 1:]
I drink a boost for breakfast, and ensure for dizzert
Somebody ordered pancakes I just sip the sizzurp
That right there could drive a sane man bizzerk
Not to worry y'll Mr. H 2 the Izzo's back to wizzerk
How do you console my mom or give her light support
When you telling her your sons' on life support
And just imagine how my girl feel
On the plane scared as hell that her guy look like Emitt Till
She was with me before the deal she been trying to be mine
She a delta so she been throwing them Dynasty signs
No use me tryin' to be lyin'
I been trying to signed
Trying to be a millionaire
How I use two lifelines
In the same hospital where Biggie Smalls died
The doctor said I had blood clots
But I ain't Jamaican man
Story on mtv and I ain't trying to make the band
I swear this right here is history in the making man

I really apologize how I sound right now man
If it's unclear at all, man
They got my mouth wired shut for like I don't know the doctor said for like six weeks
You know we had reconstru....
I had reconstructive surgery on my jaw
Looked in the mirror half my jaw was in the back of my mouth man
I couldn't believe it
But I'm still here for yall right now yo
This is what I gotta say yo
Yeah, turn me up yeah

[Verse 2:]
What if somebody from the Chi was I'll got a deal on the hottest rap label around
But he wasn't talking bout coke and birds it was more like spoken word
Except he really putting it down
And he explained the story about how blacks came from glory
And what we need to do in the game
Good dude, Bad night, Right place, Wrong time
In the blink of an eye his whole life changed
If you could feel how my face felt you would know how Mase felt
Thank God I ain't to cool for the safe belt
I swear to God drive two on the sue
I got lawyer for the case to keep what's in my safe; safe
My dawgs couldn't tell if I
I look Tom Cruise on Vanilla Sky, it was televised
All they heard was that I was in an accident like geico
They thought I was burnt up like Pepsi did Michael
I must gotta angel
Cause look how death missed his ass
Unbreakable, would you thought they called me Mr. Glass
Look back on my life like the ghost of Christmas past
Toys are Us where I used to spend that Christmas cash
And I still wont grow up, I'm a grown ass kid
Swear I should be locked up for stupid shit that I did
But I'm a champion, so I turned tragedy to triumph
Make music that's fire, spit my soul through the wire

Know what I'm saying
When the doctor told me I had a um.. I was goin to have a plate on my chin
I said dawg don't you realize I'll never make it on the plane now
Its bad enough I got all this jewelry on
Can't be serious man

"Through the Wire" is the lead single from Kanye West's debut album The College Dropout. It samples Chaka Khan's 1985 single "Through the Fire". In 2002 while living in Los Angeles, Kanye was severely injured in a car accident and had to have his jaw wired shut. "Through the Wire" was originally recorded while West was in the hospital, and first appeared on the Get Well Soon mixtape. "Through the Wire" peaked at number 15 on the Billboard Hot 100 and received positive reviews from music critics. It was certified Platinum and Gold in the United States and United Kingdom, respectively. The song was nominated for a 2005 Grammy Award for Best Rap Solo Performance, but lost to Jay-Z's "99 Problems". The music video was financed by West, who was inspired by an Adidas advertisement. It won Video of the Year at the 2004 Source Hip-Hop Awards. On October 23, 2002, West was in a California recording studio producing music for Beanie Sigel, Peedi Crakk, and The Black Eyed Peas. After leaving the studio at around 3 a.m. in his rented Lexus, he had a near-fatal crash when he was cut off by a car, ran head-on into traffic, and collided with another car near the W Hotel. He was taken to the Cedars-Sinai Medical Center, mentioned in the song as "the same hospital where Biggie Smalls died," and had his jaw wired to his face in reconstructive surgery. Two weeks after being admitted to the hospital, he recorded the song at the Record Plant Studios with his jaw still wired shut. Consequence recalls West started rapping the lyrics to the song three days after the crash. "The song's title refers to the wires used to hold his broken jaw together. When asked about how the incident changed his music, West stated: Well, the only thing this accident's is saying is, "I am about to hand you the world, just know at any given time I can take it away from you." To nearly lose your life, to nearly lose your mouth, your voice, your whole face, as a rapper...and I had to be on TV! My face looks crazy to me now... But I have to just thank God for the situation that I am in... "Through The Wire" is the worst thing that could've possibly happened to me, and now it's obviously the best thing. Look how it exploded!"