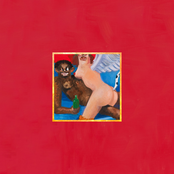 [Rick Ross]
Bitch I'm a monster no good blood sucker
Fat muthaf-cker now look who's in trouble
As you run through my jungle all you hear is rumbles
Kanye West sample, here's one for example

The best living or dead hands down huh?
Less talk more head right now huh?
And my eyes more red than the devil is
And I'm bout to take it to another level bitch
There you go again, aint nobody as cold as this
Do the rap and the track tripled up and no assist
But my only focus is staying on some bogus sh-t
Argue with my older bitch acting like I owe her sh-t
I heard the people sayin raps are gettin trap mayne
Bought the chain that always give me back pain
F-ckin up my money so yeh I had to act sane
Chi n-gga but he's hold of his accent

"Monster" is a song by American hip-hop recording artist Kanye West, released as the third single from his fifth studio album "My Beautiful Dark Twisted Fantasy". The song features rappers Jay-Z, Rick Ross, and Nicki Minaj, along with indie folk group Bon Iver. All five credited acts have writing credits on the posse cut, with the production handled by West and Mike Dean. Lyrically, the song expresses often disturbing, horror film-influenced concepts, with some comparing the song's eerie aesthetic to the Michael Jackson track "Thriller". The song contains an atmospheric, drum-heavy composition. Originally released through West's GOOD Friday initiative, a weekly free music giveaway he started to promote "My Beautiful Dark Twisted Fantasy", "Monster" was later confirmed to be featured on the album, and was released as a digital download on October 23. It was met with mostly positive reviews from music critics, with Minaj's verse being praised, and West's production being well received. However, critics were mixed in their assessing of who had the better verse between West and Jay-Z. The song was listed amongst the best tracks of 2010 by publications, with NME placing it at number 53 on its list of the "150 Best Tracks of the Past 15 Years". The song debuted and peaked on the Billboard Hot 100 at position 18. "Monster" was promoted with an accompanying music video, directed by Jake Nava. The music video had several references to horror films and featured extensive horror imagery, with zombies, decapitated corpses and heavily atmospheric cinematography. The music video was widely controversial, being banned from MTV. The video has been criticized for its portrayal of women, and the content of the video was described as weird and disturbing in nature.