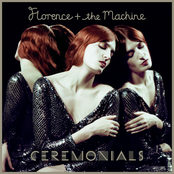 The Breaking Down Songfacts says: Florence Welch, the frontwoman and primary contributor to Florence and the Machine, wrote much of her debut album, Lungs, about breaking up with her long term boyfriend, Stuart Hammond. The pair later patched things up and got back together but they eventually spilt up again. "Breaking Down", which evokes both mental fragility and childhood fears was inspired by the ending of their relationship for a second time.