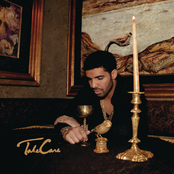 [Verse 1]
I might be too strung out on compliments
Overdosed on confidence
Started not to give a fuck and stop fearing the consequence
Drinking every night because we
Drink to my accomplishments
Faded way too long, I'm floating in and out of consciousness
And they saying I'm bad, I agree with that
I took my time with all this shit
I still believe in that
I had someone tell me I fell off, ooh I needed that
And that they want to see me pick it back up
Well, where'd I leave it at?
I know I exaggerated things, now I got it like that
Stuff my napkin in my shirt cause I'm just mobbing like that
You know good and well that you don't want a problem like that
You going to make someone around me catch a body like that
No, don't do it, please don't do it
Cause one of us goes in, and we all go through it
And Drizzy got the money, so Drizzy going to pay it
Told my brothers, I am not even got to say it
That's just something they know
They know, they know, they know
They know, they know, they know

[Verse 2]
I be yelling out money over everything
Money on my mind. Then she want to ask
When it got so empty. Tell her I apologize
Happened over time. She said she miss the old drake
Girl, don't tempt me...
If they don't get it, they will be over you
That new shit that you got is overdue
You better do what you supposed to do
I'm like "why I got to be all that?"
But still, I can't deny the fact
That it's true, listening to you expressing all them feelings
Soap opera rappers, all these niggas sound like all my children
And that's who you thinking is about to come and make a killing
I guess it really is just me, myself and all my millions
You know that they have not even got it like that
You going to hype me up and make me catch your body like that
Cause I live for this, it isn't just a hobby like that
When they get my shit and play it, I did not even got to say it
They know. They know, they know, they know
They know, they know, they know

[Outro]
I be yelling out: money over everything, money on my mind
Tell them I apologize, happened over time
They know