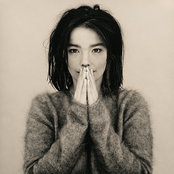 Venus as a Boy

Björk - Venus as a Boy

His wicked sense of humour
Suggests exciting s**
His fingers focus on her
Touches, he's venus as a boy.

"Venus as a Boy" is the second single from Björk's debut studio album, Debut. The song was inspired by a boy who saw everything from a "beauty point of view". It's an ambient and chill-out song that features a musical ensemble made up of Indian instruments like tablas. The song received mixed reviews from critics, who discussed Björk's musical shift.