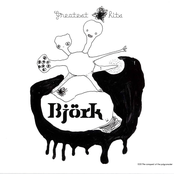 "Pagan Poetry" is a song recorded by Björk for her fourth studio album, Vespertine (2001). It was released as the second single from the album on November 5, 2001, by One Little Indian Records. The single peaked at number 38 in the UK and number 15 in Canada. Björk wanted to make an album with an intimate, domestic sound, deviating from the sonority of her previous studio album Homogenic (1997). With the rising popularity of Napster and music downloads, she decided to use instruments whose sounds would not be compromised when downloaded and played on a computer, including the harp, the celesta, clavichord, strings, and custom music boxes. Assisted by the duo Matmos, Björk created "microbeats" from various household sounds, such as that of shuffling cards and ice being cracked. Lyrically, the album revolves around sex and love – sometimes explicitly – inspired by her at the time new relationship with Matthew Barney; other lyrical sources include a poem by E. E. Cummings, Sarah Kane's play Crave, and dialogues written by Harmony Korine. Björk, a self-titled coffee table book containing photographs of the artist throughout her career, was released simultaneously with the album.

Advertisement
Related Tracks
Björk - Hidden Place
Björk - It's Not Up to You
Kate Bush - Get Out of My House
Fiona Apple - On The Bound
Fiona Apple - Fast As You Can
Kate Bush - Sat in Your Lap
The Sugarcubes - Birthday
Arca - Lethargy
Radiohead - Idioteque
Arca - Xenomorphgirl
Radiohead - Everything in Its Right Place
PJ Harvey - Rid of Me
FKA twigs - Figure 8
PJ Harvey - Down by the Water
M.I.A. - Popular
M.I.A. - beep
Kelela - All The Way Down
Madonna - Bedtime Story
Tori Amos - Spark
Tori Amos - Cruel
Portishead - The Rip
Gorillaz - On Melancholy Hill
FKA twigs - Ultraviolet
The Sugarcubes - dEUS
St. Vincent - Chloe in the Afternoon