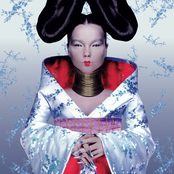 If travel is searching
And home has been found

Thought I could organise freedom
How Scandinavian of me
You sussed it out, didn't you?

(you just didn't know me)

This song is written by Björk and produced by Björk in collaboration with Mark Bell of LFO. The hunting song of "Homogenic". The video was directed by long time collaborator Paul White of Me Company. It was his first video for Björk and it used complicated 3d animation by Digital Domain. "I guess that song's about when you have a lot of people that work for you and you sort-of have to write songs or people get unemployed, you know? In most cases, it's inspiring but in that particular song I was pissed off with it. I was ready for a break but it didn't seem fair on the people I worked with at the time."

Advertisement
Related Tracks
Björk - Unravel
Björk - Jóga
Moloko - If You Have a Cross to Bear You May as Well Use It as a Crutch
Kruder & Dorfmeister - Eastwest
Fiona Apple - On The Bound
Moloko - It's Your Problem
Bitter:Sweet - Come Along With Me
Martina Topley-Bird - Yesterday
Fiona Apple - Fast As You Can
Hooverphonic - Electro Shock Faders
Kate Bush - Sat in Your Lap
Kate Bush - Get Out of My House
Goldfrapp - Tiptoe
Goldfrapp - Deep Honey
The Sugarcubes - Birthday
Hooverphonic - Jackie Cane
Portishead - We Carry On
Portishead - Machine Gun
Radiohead - Idioteque
PJ Harvey - Rid of Me
Radiohead - Everything in Its Right Place
Sneaker Pimps - Tesko Suicide
I Monster - Everyone's A Loser
PJ Harvey - Down by the Water
FKA twigs - Figure 8