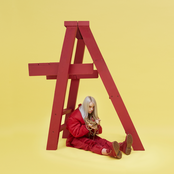 dont smile at me

[Verse 1]
Lips meet teeth and tongue
My heart skips eight beats at once
If we were meant to be, we would have been by now
See what you wanna see, but all I see is him right now

[Verse 2]
Your love feels so fake
And my demands aren't high to make
If I could get to sleep, I would have slept by now
Your lies will never keep, I think you need to blow 'em out

[Bridge]
When you call my name
Do you think I'll come runnin'?
You never did the same
So good at givin' me nothin'
When you close your eyes, do you picture me?
When you fantasize, am I your fantasy?
Now you know
Now I'm free

“watch” describes Billie’s perspective of unrequited love as she can’t grasp why she isn’t with the one she wants to be with. This second single off of Billie’s debut EP was released on June 30, 2017. The track’s music video was released on September 18, 2017. The video features girls dressed in elaborate, overfitted sportswear laying ontop of four, orange, Dodge Challengers (cars), representing Billie’s thoughts and thought process'. In the middle of the room is Billie, soaked in gasoline, sitting atop a ladder which she’s tied to. Another, newer version of Billie resides in a bedroom made of wax, laying in repose as the walls melt. The end sees Eilish walking to the ladder and lighting her old self on fire, watching as she burns. “watch” has a alternative version, titled “&burn” as a remix featuring Vince Staples, appearing as the final (9th) track of the EP, “dont smile at me”. It is almost identical to “watch”, though it strips away the piano melodies and trades the sensual voices for subdues and synthetic ones. It should also be noted that together, the two form a sentence— “watch &burn,” which acts as an accordance to the lyrics, as well as a play on the phrase “watch and learn.”