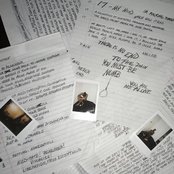 This album was first announced on X’s Periscope when he was released on probation in March. He also addressed it in his interview with 103.5 The Beat. On July 30th, X announced the release date on his Instagram story, which was August 25th.

X had “17” tatted on the upper right side of his forehead; the number likely signifies his last year on Earth since he planned on dying at 18.

He revealed on his Instagram story that this album is “for the depressed ones, the lost ones” and not for people looking for his hype style of music. He confirmed this claim when he previewed the songs and tracklist on his Snapchat story.

On August 22nd, X revealed the final tracklist on Instagram as well as the cover art. .

4) Everybody Dies in Their Nightmares