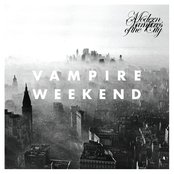 "Modern Vampires of the City" is the third studio album by American indie rock band Vampire Weekend. It was released on May 14, 2013, by XL Recordings. The group began to write songs for the album during soundchecks on the supporting concert tour for their 2010 album "Contra". After a period in which each member explored individual musical projects, they regrouped and continued working on "Modern Vampires of the City" in 2011. With no deadline in mind, the band brought in an outside record producer for the first time, Ariel Rechtshaid, to record the album.

With Modern Vampires of the City, Vampire Weekend attempted to depart from the African-influenced indie pop style of their previous records. Broadly experimental, the album's sound was the result of a variety of unconventional recording assets, including pitch shifting. Subjects explored on the record include characters with adult responsibilities, reflections on growing old, mortality, and religious faith. Vampire Weekend titled the album after a lyric in the 1990 Junior Reid song "One Blood" and chose a Neal Boenzi photograph of the 1966 New York City smog event as the album cover, citing the haunting qualities of both the title and photograph as the reason for using them.

"Modern Vampires of the City" debuted at number one on the Billboard 200, becoming Vampire Weekend's second consecutive number-one album in the United States. By December 2014, the album had sold 505,000 copies in the US. It was also a widespread critical success and ranked by several publications as 2013's best album, while finishing second in the annual Pazz & Jop critics poll. It has since been ranked on many lists of the best albums from the 2010s. In 2020, the album was ranked at number 328 on Rolling Stone's 500 Greatest Albums of All Time list.

The success of Vampire Weekend's second album "Contra", established the group as "one of the past decade's great indie-rock success stories." By the time their world tour for Contra ended, the band realized they had not taken a break in nearly five years. During the break, each member pursued individual projects: Baio performed DJ sets and scored the Bob Byington film "Somebody Up There Likes Me", Batmanglij recorded solo material and produced tracks for Das Racist and spent time traveling India with three friends, and Koenig collaborated with Major Lazer. Koenig had broken up with his girlfriend shortly before the release of "Contra" and subsequently moved out of their shared apartment in New York. Feeling "weird and aimless", Koenig attempted to stay in Los Angeles but he returned to New York after four months.

"Modern Vampires of the City" is a departure from the percussive, African-influenced indie pop of "Contra". Batmanglij said that the album has a recurring tension that distinguishes it from the band's previous albums: "Even if the songs are mostly in a major key, there’s something that’s hanging out there that’s a little bit dark. And I think that’s reflective of the world." According to Heather Phares of AllMusic, the album abandoned the eclectic influences of "Contra" in favor of "a less audacious production style and smaller instrumental palette: guitar, organ, harpsichord, and the occasional sample combine into a rarefied sound that suggests a more insular version of their debut". She pointed to how the album is bookended by the stylistically narrow chamber pop on the songs "Obvious Bicycle" and "Young Lion".

"Step" was inspired by a lyric from Souls of Mischief's 1993 song "Step to My Girl", which sampled Grover Washington, Jr.'s cover of Bread's "Aubrey". The vocal melody of the chorus interprets the melody of "Aubrey" so close that the band had to clear it as a sample. The chorus vocals were recorded in Ableton Live using the onboard microphone in Batmanglij's MacBook Pro. Alexis Petridis viewed that some songs echo lesser known "musical tropes" from the group's previous albums—a mock Irish folk influence is heard on "Unbelievers", while "Step" features "Left Banke-inspired baroque pop". More generally, Steven Edelstone of Paste magazine regarded the music as a mix of "chamber pop and world-weariness". According to Brice Ezell from PopMatters, this album is "very much an indie rock record" because of Koenig's voice and diction, which reveals "the youth that he and his bandmates so often strive to shrug off." Ezell asserts that, on songs such as "Unbelievers", the "reckless abandon" expressed by the lyrics reveals "the group's grasp on the genuine rebellion that indie rock ought to strive for."

In comparison to the band's previous music, the lyrics explore more mature, world-weary themes such as growing old and disillusionment with American foreign policy. The album abandons the theme of privileged youth from their first two albums in favor of characters faced with adult responsibilities and reflections on the passage of time. Faith and mortality are recurring themes on songs such as "Unbelievers", "Worship You", and "Everlasting Arms". Koenig discussed "Modern Vampires of the City" in the context of the band's first three albums, which he compared to "Brideshead Revisited": "The naïve joyous school days in the beginning. Then the expansion of the world, travel, seeing other places, learning a little bit more about how people live. And then the end is a little bit of growing up, starting to think more seriously about your life and your faith. If people could look at our three albums as a bildungsroman, I’d be O.K. with that."

The title was taken from a lyric in Junior Reid's 1990 song "One Blood". Koenig, a fan of the song, found the phrase "Modern Vampires of the City" humorous but also "haunting" as a title for their album. The album's title was revealed in the "Notices & Lost and Found" column of the classifieds section in The New York Times on February 4, 2013; vaguely defined, curlicued letters spelling the title were printed alongside the release date.

Koenig, Batmanglij, and art directors Matt de Jong and Asher Sarlin were credited with designing the album's packaging. For the cover art, the band chose an image taken by New York Times photographer Neal Boenzi, depicting a smog-shrouded, dystopian-looking New York City. Boenzi took the photo atop the Empire State Building in November 1966, when the city was plagued by a smog problem. Because of the subsequent rise in global air pollution, the band chose the photo believing it may have rendered "some kind of future".

Modern Vampires of the City was met with widespread critical acclaim. At Metacritic, which assigns a normalized rating out of 100 to reviews from mainstream publications, the album received an average score of 84, based on 51 reviews. Aggregator AnyDecentMusic? gave it 8.2 out of 10, based on their assessment of the critical consensus.

Reviewing the album in The Independent, Simon Price called it Vampire Weekend's "most cohesive and convincing effort yet" featuring their most accessible compositions. Ryan Dombal from Pitchfork said the singing suited the music fluidly on songs that sounded more natural and dynamic than the band's previous work. Alexis Petridis, lead critic for The Guardian, believed Vampire Weekend successfully avoided the gimmicky sounds of their previous albums and wrote more genuine lyrics dealing with mortality rather than "arch depictions of moneyed young Wasp lives". Slant Magazine's Jesse Cataldo said the songs may sound dense and wordy, but they would be "immediately potent on a purely visceral level" for listeners, "striking a perfect balance that makes for what's perhaps the best album of the year". Nathan Brackett of Rolling Stone said the album featured a particular spirit and songcraft evocative of urban life, while Robert Christgau appreciated how many twists the coming of age themes revealed. In his review for MSN Music, Christgau found the record similar to the Beatles' "Sgt. Pepper's Lonely Hearts Club Band" (1967) because of how each lyric and musical element was "pleasurable in itself and aptly situated in the sturdy songs and tracks, so that the whole signifies without a hint of concept".

Other reviewers expressed some reservations. In the Chicago Tribune, Greg Kot wrote that Vampire Weekend occasionally blundered in an attempt at ingenuity with the songs "Ya Hey" and "Finger Back" while finding the album "darker, slower and weirder" than their previous records. NME journalist John Calvert believed the band had sacrificed "the sonic smarts that made them" on what was an otherwise "gorgeous album".

By the end of 2013, "Modern Vampires of the City" had been named the year's best album in a number of polls; according to Acclaimed Music, it was the highest ranked record on average in critics' year-end lists. AllMusic named it one of the year's 50 best records, and it was voted the second best album of 2013 in the Pazz & Jop, an annual poll of American critics nationwide, published by The Village Voice. Christgau, the poll's creator, ranked it first in his own list for The Barnes & Noble Review, writing in an accompanying essay that Vampire Weekend had made an art pop record that "simulates predigital warmth by tinkering with a dizzying panoply of studio stratagems and divides the most emotional songs of the band’s career into distinct parts impossible to enumerate due to how often the arrangements change up gorgeous drum tracks, but I dare you to dance to them". At the 2014 Grammy Awards, "Modern Vampires of the City" won in the category of Best Alternative Music Album. In 2020, Rolling Stone placed it at number 328 on the magazine's revision to the 500 Greatest Albums of All Time list. .