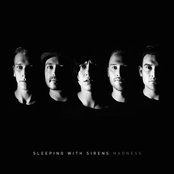 Madness is the fourth full-length studio album by American rock band Sleeping With Sirens. The album was released on March 17, 2015 through Epitaph Records. The lead single, "Kick Me" was released on November 10, 2014 and to digital download outlets on November 16. On January 1, 2015, the band streamed the song "We Like It Loud" on Soundcloud and made it available to download for free for one day on their website. The second single, "Go Go Go" was released on January 22, 2015 accompanied with its music video which premiered on the Epitaph YouTube channel. The entire album was self-produced by Sleeping With Sirens and executively produced by John Feldmann. The album is the band's first release following their departure from Rise Records in 2014. It's also the first record to feature guitarist, Nick Martin, who replace former guitarist Jesse Lawson. The deluxe edition includes two extra songs "Parasites" & "2 Chord". .