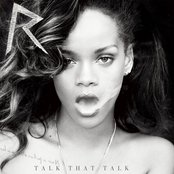 Talk That Talk is the sixth studio album by Barbadian singer Rihanna, released on November 18, 2011, by Def Jam Recordings and SRP Records. It was recorded while traveling for the Loud Tour between February and November 2011, and was originally planned to be a reissue of her previous studio album Loud (2010). As executive producer, Rihanna enlisted a wide range of producers including Alex da Kid, Calvin Harris, Chase & Status, No I.D., and StarGate to achieve her desired sound. Following in the same vein as Loud, Talk That Talk is a dance-oriented pop/R&B crossover album that incorporates elements of hip hop, dubstep, electronic and house music. The album also continues to have subtle dancehall genres, whilst its lyrical content and themes revolve around a nihilist, romantic and lascivious lover.

Talk That Talk received generally positive reviews from music critics, who praised the albums lyrics, while others were less favourable of the albums themes. Talk That Talk debuted at number three on the US Billboard 200 with first-week sales of 198,000 copies and went on to sell 1.15 million copies in the United States by June 2015. The album also peaked at number one in Austria, New Zealand, Norway, Switzerland and the United Kingdom, where it debuted at number one on the UK Albums Chart, selling 163,000 copies in its first week. As of April 2012, the album has been certified triple Platinum by the British Phonographic Industry (BPI) for shipments of 900,000 copies. As of March 2013, the album has sold more than 5.5 million copies worldwide.

The album produced six singles, including the international hit "We Found Love" which was released as the albums lead single. "We Found Love" became Rihanna's eleventh number-one song on the US Billboard Hot 100, and topped the charts in twenty six additional countries. "You da One", "Talk That Talk" (featuring rapper Jay Z) and a remix of "Birthday Cake" (featuring Chris Brown) experienced moderate success, while "Where Have You Been" reached the top ten of twenty countries around the world. A remixed form of "Cockiness (Love It)" (featuring rapper A$AP Rocky) was released as the sixth and final single from the album. .

2) Where Have You Been