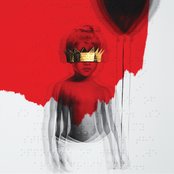 ANTI is the eighth studio album by Barbadian singer Rihanna. It was released January 28, 2016 by Westbury Road and Roc Nation. It marks her first full-length release since Unapologetic (2012), 4 years prior, and her first after leaving longtime recording label Def Jam.

The artwork was designed by Israeli artist Roy Nachum, and was described by Rihanna as her "favorite album cover". The album's front cover shows an image of Rihanna, which was taken on her first day of day care, holding a black balloon, with a gold crown covering her eyes; the majority of the artwork is black and white with a "smattering" of red paint. Speaking about the cover art's concept, Nachum stated that he painted a young Rihanna to represent her "bringing something new" to music.

ANTI topped the list of 101 Best Albums of the 2010s by SPIN magazine, as well as being featured on the top 10 of Billboard's and NME's respective lists.

The album reached the summit of the Billboard 200 for 2 non-consecutive weeks. During its second week atop the chart, lead single "Work" topped the Billboard Hot 100 simultaneously, marking the second time Rihanna achieved the feat in her career.

As of 2022, it has received a triple platinum certification in the United States for 3,000,000 copies sold and 4.5 billion streams on Spotify. .