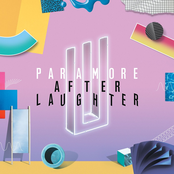 After Laughter is the fifth studio album by American rock band Paramore, released on May 12, 2017 through Fueled by Ramen as a follow-up to Paramore (2013). It is their first album since the return of drummer Zac Farro, who left the band with his brother Josh in 2010, and the departure of former bassist Jeremy Davis, who left the band in 2015.

The album's lead single, "Hard Times" was released on April 19, 2017 along with the music video and a pre-order of the album. .

9) Caught in the Middle