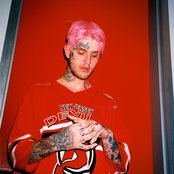 HELLBOY is the fourth & final mixtape by Lil Peep, released on September 25, 2016. The mixtape caught people’s attention, pushing him into the mainstream light.

The title HELLBOY is a reference to the animated movie Hellboy Animated: Blood and Iron, as Peep explains in a GQ interview.

This album’s title was explained by Smokeasac, who produced many songs on this album: 'I remember when we made “Hellboy”. He explained to me why he chose the name. He explained that it was because he knew that “Hellboy” came off as intimidating and scary to some but it was because he was like a book that was only judged by its cover. “Hellboy” was actually a super hero who had a huge heart and that’s exactly what Peep was, a super hero with a humongous heart.'

On September 21, 2020, Lil Peep’s estate announced a re-release of HELLBOY to be released on September 25, the same date it was released four years back on SoundCloud. .

4) The Song They Played (When I Crashed Into the Wall)

15) Walk Away As the Door Slams