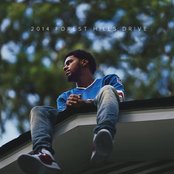 "2014 Forest Hills Drive" is the third studio album by American hip hop recording artist J. Cole. It was released on December 9, 2014, by Dreamville, Roc Nation and Columbia Records. Recording sessions took place over the whole year, while the production on the album was primarily by Cole himself, along with several others such as Illmind, Vinylz, Phonix Beats and Willie B. It was announced three weeks before its release and had very little marketing, with no singles or promotion taking place prior to its release. .