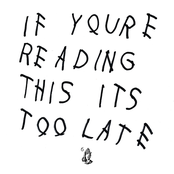 Drake - If You're Reading This It's Too Late

"If You're Reading This It's Too Late" is a commercial mixtape by Canadian rapper Drake. It was released on February 13, 2015, without prior announcement, by OVO Sound, Young Money Entertainment, Cash Money Records and Republic Records.

The album was produced by Drake's longtime collaborators 40 and Boi-1da, as well as labelmate PartyNextDoor, among others. Featured guest appearances include PartyNextDoor, Travis Scott, and Lil Wayne.

"If You're Reading This It's Too Late "received generally positive reviews and debuted at number one on the US Billboard 200, with first week sales of 495,000 copies and 40,000 for online streaming credits, making this Drake's fourth time at the top of the chart. The mixtape also broke Spotify's first-week streaming record with over 17.3 million streams in the first three days. It was previously held by Drake himself, with his album "Nothing Was the Same", with 15.146 million streams in the first week.

"If You're Reading This It's Too Late" debuted at number one on the Canadian Albums Chart, selling 37,000 copies in its first week. The mixtape also debuted at number one on the US Billboard 200, selling 535,000 album-equivalent units, 495,000 of which consisted of traditional whole album sales. The mixtape was also streamed 17.3 million times on Spotify, breaking Drake's own record that was made with Nothing Was the Same's debut week. Because of the mixtape, Drake also became the first rapper to top the US Billboard Artist 100. As of December 2015, the mixtape has sold 1.1 million copies in the United States. On March 15, 2016, the mixtape was certified double platinum by the Recording Industry Association of America (RIAA) for combined sales and album-equivalent units of over two million units. .