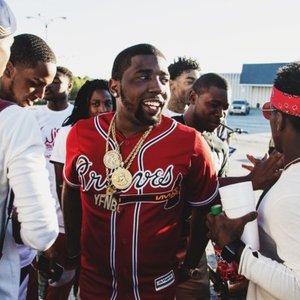 Born and raised in Atlanta, Georgia, YFN Lucci grew up listening to the likes of Tupac, the Hot Boys, Ja Rule, Dipset, Lil’ Wayne and Fabolous. Motivated by his older brother and rapper “K,” YFN Lucci discovered his own musical talent at age 16 and started developing his clever pen game.

A year later, he connected with fellow Atlanta rap artist Johnny Cinco who encouraged Lucci to take his talents seriously and get in the studio. YFN Lucci went on to perfect his craft and develop his sound over the years, eventually landing on two records off of Johnny Cinco’s “John Popi” mixtape in 2014.

YFN Lucci joins a golden roster of talent including Rich Homie Quan and Trinidad James at TIG. Since the release of his mixtape which garnered over 1M views at Live Mixtapes, Lucci has toured continuously over the last six months from Wisconsin to Miami, Charlotte to Houston. When not in the studio, he’s in the studio working with producers Sonny Digital, Fresh Jones and Spiffy.

YFN Lucci’s creative blend of singing and lyricism make for a unique sound with a southern touch. Now, with new music and colorful visuals there’s no end in sight for this Hip-Hop star in the making with his current songs in rotation at radio “I Wonder Why” and “Know No Better”. The “Wish Me Well” EP is available now on iTunes.

Wish Me Well 2 dropped on Lucci's birthday February 16, 2016 featuring all new music including "YFN", "Boss", "Destined" and "Key to the Streets" f/Migos and Trouble.