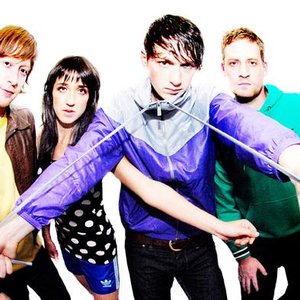 1) The Whip is an electronic rock band from Manchester, UK, formed in 2006. The band members are Danny Saville, Fiona "Lil Fee" Daniel, Nathan Sudders and Bruce Carter. In 2006, they released both Frustration and Trash. This was soon followed in 2007 by the release of three singles through a selection of labels; Muzzle No.1, Divebomb and Sister Siam.

2) The Whip was a Northwestern punk band. The band released a 7" and broke up shortly after the death of drummer Scott Jernigan in a boating accident. The group featured Joe Preston of Thrones, Melvins, High on Fire, amd Earth fame as well as Jared Warren of KARP and future member of Tight Bros From Way Back When,Big Business and Melvins. They released a 7" on the Wantage USA label (Freelance Liason/Sheep and Goat Judgement) had one tour ep that featured five songs, and a cover of Queen's Stone Cold Crazy as well as multiple live shows available online.