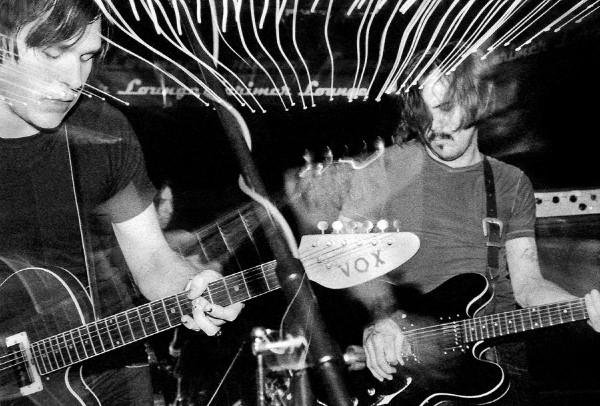 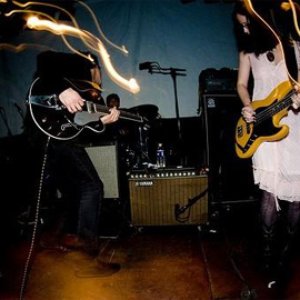 The Warlocks are an American rock band based out of Los Angeles. Their music has been defined as neo-psychedelia, but much of it spans multiple genres.
After forming in 1999, the ever-changing personnel of The Warlocks meant that the band had already toured nineteen different members before it was slimmed to the classic seven-piece outfit that established their reputation. Consisting of Bobby Hecksher (Vocals/Guitar), J.C. Rees (guitar), Ryan McBride (guitar), Jenny Fraser (Bass), Laura Grigsby (Tambourine/Keys), Bob Mustachio (Drums) and Jason Anchondo (Drums) - their two drummers with four guitarists formation produced a relentless, hypnotic wall of sound that suggested a collision between classic psychedelia, Krautrock and The Velvet Underground-style rock and roll.
Front man Bobby Hecksher grew up in the swamps of Tampa Bay, Florida where he was practically raised at a radio station owned his Grandfather and where his mum also worked as a secretary. As a result Bobby was soon eating and breathing rock'n'roll on a daily basis.
Bobby recalls, "My granddad was an inspiration. He created the radio station out of thin air. And from it all these nuggets of rock'n'roll came toward me".
At sixteen his family left the swamps and moved to LA where Bobby soon found kindred spirits. He jammed with Beck playing bass on "Stereopathetic Soul Manure"; he hung out in the in the decadent atmosphere of the 'Mad Hatter' club and moonlighted in the Brian Jonestown Massacre whilst also attending parties with legendary acid guru Timothy Leary, a potent cultural and creative mix that led to the formation of The Warlocks.
Time isn’t constant or concrete. It’s made of color and shade. Time flows, blurs and fades away in dim morning light. Time melts. And The Warlocks are the ecstatic, hazy, foreboding, holy tick tock of time that isn’t anything at all.
For five albums, The Warlocks have lived in between and beyond minutes and hours. Sway to The Warlocks live and loud songs will drift and envelop each other like fog. Listen to the records and you’ll hear soundtracks to fuzz-freaked, bacchanalian stomps, pre-dawn city prowls, sleeping late with new crushes, and the elation and exhaustion that wash in and recede deep in the wee hours.
The Warlocks new LP The Mirror Explodes speaks and whispers from all of these places. But where the band’s last long player, Heavy Deavy Skull Lover, tweaked time in a icy-cool, white-noise swirl that evoked a decadent lysergic night, The Mirror Explodes is disorientation through a longer lens —pictures of luck, longing, losing, moods and fever dreams scrambled in the haze of near and distant memory.
On the 8 songs of The Mirror Explodes, the band’s signature amalgam of White Light/White Heat attack; space panoramas, fuzz, melancholy, and melody is present and potent. But there is vivid focus too. Throbbing bass lines, distant rolling thunder drums, and zombie rattlesnake shake are a heartbeat of strange, ominous vitality. Guitars howl, slash and bounce like light. Bobby Hecksher’s vocals sound oddly alone and unsettlingly intimate all at once. And just when you think you understand the sum of these sonic elements, they become something else entirely…
Discography (full length):
Rise and Fall (2001)
Phoenix (2002)
Surgery (2005)
Heavy Deavy Skull Lover (2007)
The Mirror Explodes (2009)