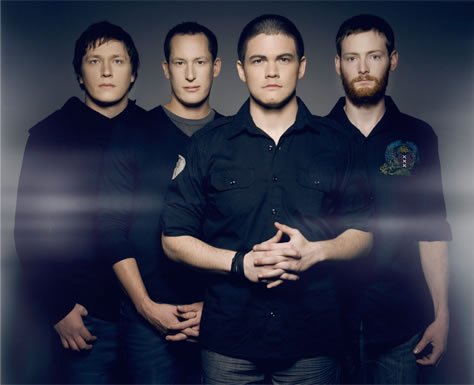 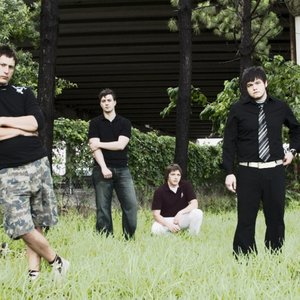 The Spill Canvas started in 2002 in Sioux Falls, South Dakota as a side project for lead singer, Nick Thomas, who at the time, was guitarist and backup vocalist for metalcore outfit Nodes of Ranvier. As time passed, Thomas resigned from Nodes and went full-time with The Spill Canvas. While growing up in Sioux Falls, South Dakota, Thomas recorded his first songs at age 15, funded by his father who strongly encouraged his son's evident musical talent. Although Thomas admits that results of those studio sessions were "atrocious," the fledgling singer-songwriter honed his largely acoustic-based style playing solo shows in and around his hometown. After performing with a few local bands, Thomas returned to his solo music with conviction, dubbing it The Spill Canvas.

After sending demo after demo to labels around the county, the music caught the attention One Eleven Records owner Brad Fischetti. The result of that record deal was the raw and emotive Sunsets and Car Crashes, released on April 20, 2004, which began to amass Thomas eager fans around the country. Thomas was then joined by members Joe Beck, Ross Wheeler, and Brandon Aegerter shortly after the release of Sunsets and Car Crashes. Wheeler and Aegerter left the group and were replaced by Scott McGuire and Dan Ludeman. The four members collectively wrote what would be The Spill Canvas' second album, One Fell Swoop. The album was released on August 9, 2005.

After officially transitioning from solo act to full-fledged rock band, The Spill Canvas recorded their dynamic debut full-length, One Fell Swoop, with producer Ed Rose (The Get-Up Kids), releasing it on One Eleven in May of 2005 to great acclaim, eventually selling over 50,000 copies.

While on tour in support of One Fell Swoop, The Spill Canvas caught the eye of Sire Records President Michael Goldstone at New Jersey's The Bamboozle Festival in 2006. Ready to take the next step forward, The Spill Canvas formed a partnership with Sire, which Thomas believes will provide the band with the promise of career longevity.

In early 2007, McGuire declared that he was no longer a part of the band, stating, "The Spill Canvas has decided in order to make music to its fullest potential, they must do so with out me." There is still much speculation as to whether he was kicked out of the band or if he decided to leave. The temporary replacement for McGuire was Landon Heil, the guitarist of another band known as The Glass Atlantic. He is now a permanent member of the band.

On May 1, 2007, the band released an EP entitled Denial Feels So Good, to hold their fans over until their new album arrived. The EP consisted of three original songs and two covers. Marc Sheaffer, a keyboardist from Sioux Falls, played keyboards on Gold Dust Woman. Following the release of the EP, the band played on the entire 2007 Warped Tour, promoting the release of their third album No Really, I'm Fine. The album was recorded in March and April 2007 and featured Anthony Green of Circa Survive and Andrew McMahon of Jack's Mannequin. Green sang backup vocals on the song Bleed, Everyone's Doing It, and McMahon played keyboards in the re-recorded version of Saved, a song originally recorded for the soundtrack of the motion picture, Superman Returns.

The third album for The Spill Canvas, (which was recorded by Neal Avron (Fall Out Boy, The Wallflowers, Yellowcard) in Hollywood, California) No Really, I'm Fine was released on October 2, 2007, although it was leaked on the internet a few days earlier. The band went on a Fall tour across North America in the Fall of 2007, named "All Your Favorite Spots". The tour was supported by Meg & Dia, Playradioplay!, and Treaty of Paris. On January 23, 2008, it was confirmed on Yellowcard's official MySpace that The Spill Canvas would be touring with them in a spring acoustic tour. In February 2008, they headed to Europe with Plain White T's and The Fold. In the summer of 2008, The Spill Canvas headlined a national tour, supported by Steel Train and Ludo. Up-and-coming pop-punkers [artist[Sing It Loud joined them for the first half of the tour, with Liam and Me joining for the end. They were joined by Motion City Soundtrack for the final leg of the tour. In late 2008, they toured with OneRepublic, The Hush Sound and Augustana. On this tour, most vocalists from all of the opening bands, including Nick, came up during Augustana's set to perform Traveling Wilbury's hit Handle With Care, trading off lead vocals.

On September 25, 2009, Joe Beck announced via the band's Twitter site that they had already finished recording 4 songs from the upcoming album. Their latest release to date is Honestly, I’m Doing Okay, a follow up EP to No Really, I’m Fine. Released in 2008 the EP was available only on the internet. Having five tracks in total it included one new song and two new acoustic versions of pre-released songs.