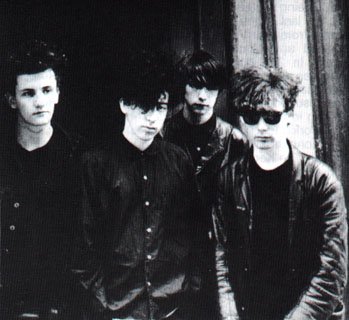 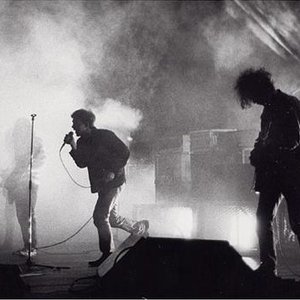 The Jesus and Mary Chain

The Jesus and Mary Chain is a chaotic, noisy indie quartet formed in Scotland, blending the Beach Boys' sunny pop with the Velvet Underground's black-leather cool. Brothers Jim Reid and William Reid, from East Kilbride, Glasgow, Scotland were the primary songwriters. "The JAMC" released a constant string of albums, singles and EPs until their demise in 1998. Having influenced many post-punk and noise rock bands, the group finally reunited in 2007. The initial line-up, formed in 1983, was augmented by bassist Douglas Hart and drummer Bobby Gillespie. Gillespie played standing up in the manner of The Velvet Underground's Maureen "Moe" Tucker.

JAMC's early gigs have become the stuff of legend in underground circles. Playing in front of small audiences, the band earned their notoriety by playing very short gigs, some lasting no more than ten minutes and consisting of a constant wall of feedback and distortion. The group became know as well for playing with their backs to the audience and refusing to speak to them. Many shows culminated with the Reids trashing their equipment, which was often followed by the audience rioting. All of this delighted manager and Creation Records boss Alan McGee, who obviously found it very easy to get attention for the band, as well as aliened more commercially-minded music business figures.

Their debut single, "Upside Down", came out in 1984 on Creation, but they signed to the WEA-backed Blanco y Negro the following year. Said label released their debut album, titled 'Psychocandy', which fused together the Reid's two primary influences, the guitar noise and avant-garde rock of The Velvet Underground with the 60s pop leanings of Phil Spector and The Beach Boys. It included songs such as the indie sensation "Just Like Honey". The record divided many music fans due to its deliberately abrasive sound yet still received positive critical reviews and is now considered a landmark recording in the history of alternative music.

Gillespie left the band before the next album, 'Darklands, came out, going on to front Primal Scream. He was briefly replaced by John Moore (later of Black Box Recorder), before former Biff Bang Pow! drummer Dave Evans. The aforementioned 'Darklands' also received supportive reviews, and it showed a less noisy and more contemplative sound that was welcomed by both many post-punk fans and many mainstream rock fans. Notable songs from that period include "April Skies" and "Happy When It Rains".

For the iconic indie label Sub Pop, the band recorded 1998's 'Munki' album, which would turn out to be their last before splitting the following year. The album is often thought of as sounding 'divided' due to the Reids' crumbling relationship. Jim Reid has recalled:

"Me and William weren't really getting along at all. That last year we barely even spoke. 'Munki' is one of my favorite albums, but it was really divided. William would go into the studio with the rest of the band and record while I wasn't there, and then I'd go in with them when William wasn't there."

William Reid then recorded as the artist Lazycame. Brother Jim formed the band Freeheat, which disbanded in 2003. Jim Reid is currently recording solo material and he has, to date, recorded and released one single Song For A Secret which was released on Transistor Records.

Like some of their influences such as Dee Dee Ramone, Lee Hazelwood, Iggy Pop and Lou Reed, throughout their career the boys were rumored to have ongoing substance abuse issues, which may have contributed to their notoriety. They reportedly dabbled in regular use of things like amphetamines and heroin, which made for lyrical reference in songs like Some Candy Talking and the album title Stoned & Dethroned.

Despite not having huge commercial success, they've gone on to influence a range of other music groups such as Black Rebel Motorcycle Club, Butthole Surfers, My Bloody Valentine, and Spacemen 3.

The Jesus and Mary Chain reunited to play at the Coachella Festival on April 27, 2007, followed by two more shows in Spain at the Summercase Festival. More shows followed in late 2007 and early 2008 in London.

Calling themselves 'Sister Vanilla' an LP, Little Pop Rock, was released in 2007 and reunites the brothers along with their sister, Linda, singing on most tracks.

Damage And Joy is the brand new studio album by The Jesus And Mary Chain, released on March 24th, 2017.

JAMC singer Jim Reid is name-checked in the 2017 song "Lollipop (Ode to Jim)" by Canadian band Alvvays which begins "I saw Jim Reid in the corridor.." and contains other allusions to JAMC themes.