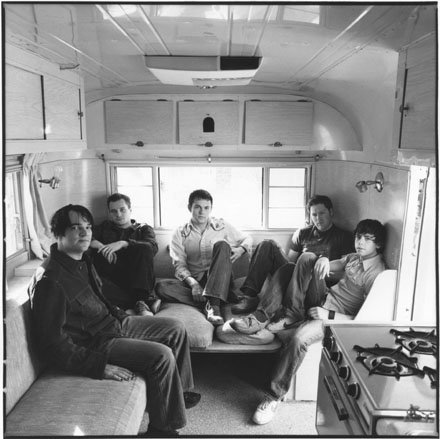 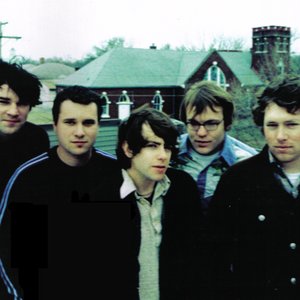 The Get Up Kids

The Get Up Kids are a Kansas City-based American emo band. Formed in 1995, the band was a major player in the mid-90's emo scene, otherwise known as the "second wave" of emo music. As they gained prominence, they began touring with bands such as Green Day and Weezer before becoming headliners themselves, eventually embarking on international tours of Japan and Europe. They founded Heroes & Villains Records, an imprint of the successful indie rock label Vagrant Records. While the imprint was started to release albums by The Get Up Kids, it served as a launching pad for several side-projects such as The New Amsterdams and Reggie and the Full Effect.
The Get Up Kids were viewed throughout their existence as a prototypical emo band, having been major players in the Midwest emo movement of the mid-1990s. However, like many early emo bands, The Get Up Kids sought to dissociate themselves with the term, as it was considered dismissive to be seen as an "emo band."Years later, guitarist Jim Suptic even apologized for having the influence they did on many of the modern third-wave emo bands, commenting that "the punk scene we came out of and the punk scene now are completely different. It’s like glam rock now . . . If this is the world we helped create, then I apologize.”

Influential Kansas City five piece, The Get Up Kids, return in January 2011 with a new studio album,There Are Rules – the band’s fifth full-length collection, and the first on their own Quality Hill Records imprint.

Seven years after what looked to be their final album Guilt Show, with the group disbanding a year later in 2005 after 10 years of constant touring, The Get Up Kids returned to the studio in 2009, sparked by a spur-of-the-moment decision to start writing songs together again, made while they were rehearsing to promote the tenth anniversary edition of their breakout album ‘Something to Write Home About’.

The first fruits of these new recordings was ‘Simple Science’, released in April 2010 - an EP that burst, unannounced, into the Billboard Top 200. But that was just a taste – a precursor to the full-length album, which Alternative Press magazine, upon hearing a whisper of its existence, placed on their “most anticipated…” list.

The band re-convened at their Black Lodge studio in Eudora, KS at various times in 2010 to complete the recordings, and so ‘There Are Rules’ came to be - twelve new songs that will prove to be both surprising, and familiar. The result is a collection of songs that are fresh and inspired, created by a band that has been given new life and isn’t looking back. In some fashion, the new tracks mark a return to the early days of The Get Up Kids, when they formed fifteen years ago above a drum store in downtown Kansas City. The recording involved lots of analog 2” tape – live takes and a feel for the unexpected. Long time producer Ed Rose was once again seated behind the mixing desk, and the band even turned to Chicago luminary Bob Weston, who recorded their debut, Four Minute Mile, to master the album. “This record came together really organically. We'd throw out an idea and if it didn't work after 30 minutes we'd scrap it and move on to another one. We all wrote together really spontaneously and then fleshed it out with Ed in the studio," says Matt Pryor.

At the same time, ‘There Are Rules’ marks a new chapter for The Get Up Kids, as they return to their independent roots, forming their own label – Quality Hill Records – and reigniting the DIY spirit that originally launched the band onto the worldwide stage. Says Pryor, “"We had a really great relationship with Vagrant but we felt that with the proverbial rebirth of the band we wanted to start our own label. Do everything ourselves like we did in the beginning." And as to naming the imprint? "Quality Hill is a historic neighborhood in Kansas City. It's not far from where we first formed the band. It seems like an appropriate name for the label." And of course, echoing their formative years, there is a 7” single involved. That 45 would be ‘Automatic’ – a limited edition release due in January 2011.

And so, after touring across four continents to sold out crowds too many times to count, after becoming a crucial part of what has been called the “second wave of emo” in the 90’s along with bands like Braid and The Promise Ring and influencing a list of bands as long as your arm, after 15 years, 4 acclaimed studio albums, a collection of rarities, a live record, numerous 7"s and EPs the Kansas City five piece – Matthew Pryor on vocals and guitar, Rob Pope on bass, Jim Suptic on guitars and vocals, James Dewees on keyboards and Ryan Pope on drums - are excited to unveil ‘There Are Rules’ in 2011, proving that the final chapter for The Get Up Kids has yet to be written.