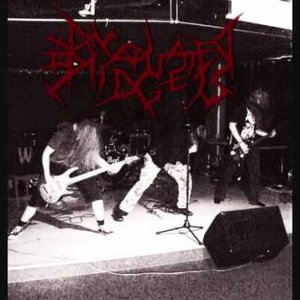 The Decapitated Midgets is a goregrind band formed in Jyväskylä, Finland in 2008. The band was accidentally formed in autumn 2008 by Juho Heinonen (gurgling & bass)and Konsta Vehkala (guitars & drums) while recording Juho's other band's EP at the legendary Paskaperä Studios. To ease their boredom they (de)composed, recorded, mixed and mastered their debut EP, ”Malignant Manifeasto”, only in 6 hours, including 6 minutes of total chaooos.

Soon after releasing the debut EP the band started planning their debut full-lenght album. The debut album Gurgling Olympics was recorded in February 2009 and it was released as a super limited tape release including bonus tracks and also as free internet release. The tape got positive responses and also caught attention of several grind labels.

Only few months after the release of Gurgling Olympics the band started once again to work for a new full-lenght. In summer 2009 they recorded their second full-lenght 30 Ways To Die and it was released by Goatgrind Records in July 2009. The album featured 30 brand new tracks and more tightened sound of the band.

Around the time of the release of 30 Ways To Die Juho and Konsta were joined by two new band members, Samuli Paananen (drums) and Lauri Myllylä (bass) who were recruited to the band as the band's live lineup and so the band performed their first gigs in 2009. The live lineup showed much more tighter TDM and so the band decided to continue as a full band from now on.

So when the full lineup was ready it was obvious that the band would record their next album as a full band too. So then the band started to work for already their third full-lenght which was supposed to record in December 2009. The idea was to record an album with 10 new tracks and 11 re-recorded tracks from the band's first full-lenght. Before the recording process Juho, the other founding member of the band, left the band for the lack of interest. Therefore the new album was recorded by the three remaining midgets. The album, entitled as Shit Ceremony was released in February 2010 by Goatgrind Records and it shows much more heavier and varied sound of the band.

In Summer 2010 the band found a new drummer after trying out few different drummers. Jimmy Salmi joined the band so the band was ready for live shows once again. A few shows were played with the new lineup until in summer 2011 Jimmy (drums) and Konsta, the other founding member of the band, left the band.