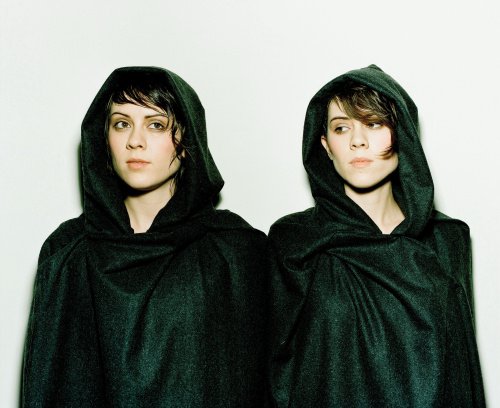 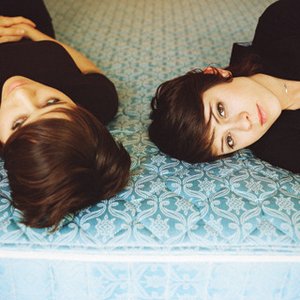 Tegan and Sara are an indie pop/indie rock duo which formed in Calgary, Alberta, Canada in 1995. The band consists of identical twin sisters Tegan Quin and Sara Quin (born September 19, 1980). Both sisters play the guitar and keyboards, and write their songs. They tour with a backing band and they're notorious for their stage banter.

Tegan and Sara initially played as Plunk in 1995, and lacked a drummer and bass player. In 1997, they used their school’s recording studio to record two demo albums: Who's in Your Band? and Play Day.

In 1998, they made an early breakthrough by winning Garage Warz Battle of the Bands, a local music competition in Calgary. Since then, the two have toured with Neil Young, Rufus Wainwright, Kaki King, The Pretenders, Ben Folds, The Killers, Rachael Cantu, Vivek Shraya, Cake, Gogol Bordello, Hot Hot Heat, Ryan Adams, Veda Hille, Little Birdy, Iron On, Little Brazil, Bryan Adams, and Weezer, and they performed a show at Sarah McLachlan's Lilith Fair.

When they were competing in Garage Warz, they were known as "Sara and Tegan" because that is how their mother registered them on the competition forms. Their first album, Under Feet Like Ours, was initially released under the name "Sara and Tegan". While both twins are similarly involved in vocals and playing instruments, the singing of the lead melody usually goes to whichever twin wrote the particular song. The two hardly sang together in the recordings of their early records, but they started to more on their later records and when live.

On their 2004 album, So Jealous, the two lend their unusual voices and simple guitar riffs to power pop ballads about love and emotional, haunting songs such as "Walking With a Ghost".

The fifth album, The Con, released July 24, 2007, showed a shift in style towards darker tunes compared to the relatively upbeat indie pop of So Jealous. The singles "Back in Your Head", "The Con" and "Call It Off" were issued to support the album. The twins toured the album for over a year and a half.

Their sixth studio album, entitled Sainthood, was released on October 27th, 2009, to generally positive reviews. The album included the singles "Hell", "Alligator", "On Directing" and "Northshore".

"Closer", the first single from their seventh album was produced by Californian pop producer Greg Kurstin. The song was made available for download September 25, 2012. On 29 January 2013, Tegan and Sara released their seventh studio album, Heartthrob.

The duo's eighth studio album, titled Love You To Death, was released on 3 June 2016. The lead single Boyfriend was released on 8 April. Greg Kurstin returned as the producer.

On October 20, 2017, the duo released a compilation album titled Tegan and Sara Present the Con X: Covers, to celebrate the tenth anniversary of The Con. The compilation contains covers of each song performed by various artists, as well as a previously unreleased demo “Miami Still”, performed by the duo. The proceeds of the record and subsequent tour benefitted the Tegan and Sara Foundation, which raises money for self-identified women and girls in the LGBTQ community.

The duo released their memoir, High School, on 27 September 2019. It recounts their childhood and adolescence growing up in Alberta in the 1990s as well as their musical beginnings. The book debuted at number fifteen on The New York Times Hardcover Nonfiction best-sellers list. Along with the book, Tegan and Sara's released their ninth studio album, Hey, I'm Just Like You, which contains re-recordings of unreleased demo songs that the duo recorded as teenagers. The record was produced by Alex Hope and is the first Tegan and Sara record produced, performed, engineered, mixed, and mastered by a team of all women. The band embarked on a US, Canada and UK tour to promote the book and album, playing mostly acoustically, reading excerpts from the book and incorporating old video footage from the band's teenage years.