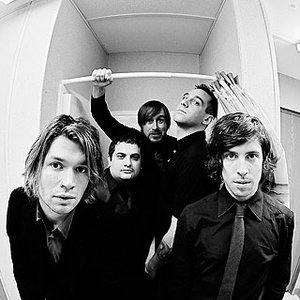 @Taking-Back-Sunday
emo rock seen live alternative punk
Taking Back Sunday are an alternative rock band originally formed in Long Island, New York in 1999. The band has gone through several lineup changes. Their first release came in 2001 with the Taking Back Sunday EP, and featured Antonio Longo on vocals, John Nolan on guitar and backing vocals, Eddie Reyes on guitar (the original founder of the band), Jesse Lacey, Adam Lazzara and Mark O'Connell replaced Stevie D) they released the follow-up album Tell All Your Friends, which was produced by Sal Villaneuva.
Top Tracks
1) MakeDamnSure
2) You're So Last Summer
3) A Decade Under the Influence
4) You Know How I Do
5) Timberwolves at New Jersey
6) Liar (It Takes One to Know One)
7) Cute Without The 'E' (Cut From The Team)
8) Ghost Man on Third
9) Great Romances of the 20th Century
10) Number Five With a Bullet
11) Set Phasers to Stun
12) Bike Scene
13) This Photograph Is Proof (I Know You Know)
14) The Blue Channel
15) Head Club
16) New American Classic
17) What's It Feel Like to Be a Ghost?
18) There's No 'I' in Team
19) One-Eighty by Summer
20) Spin
21) My Blue Heaven
22) The Union
23) I Am Fred Astaire
24) Make Damn Sure
25) Little Devotional