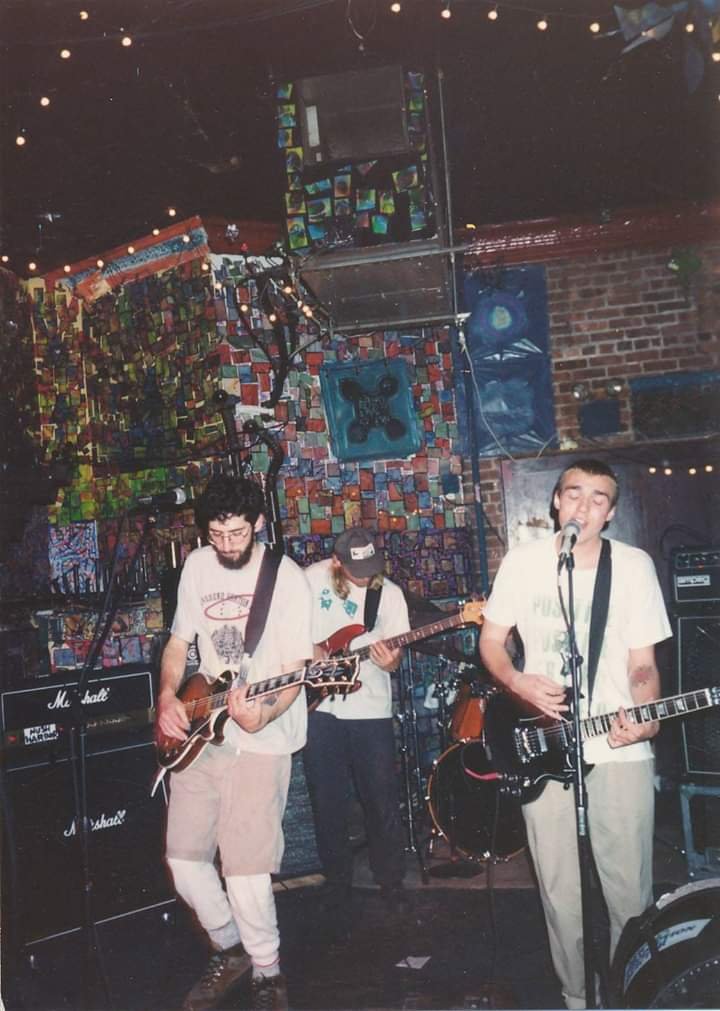 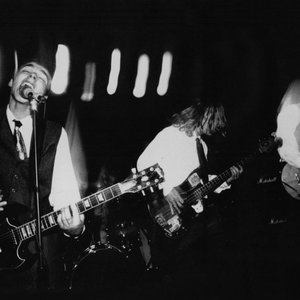 The core of Sunny Day Real Estate formed in 1992, originally under the name Empty Set. Empty Set consisted of Dan Hoerner (guitar, vocals), Nate Mendel (bass), and William Goldsmith (drums). A 7-inch called Flatland Spider was released. Mendel took a break to tour with another band, Hoerner took over the bass, and the group was joined by Jeremy Enigk, a high school friend of Goldsmith. Before long, Enigk ascended as the permanent frontman of the band. Where Hoerner's vocal style had been in the rougher, hardcore vein, Enigk's higher-pitched, somewhat strained vocal style added greater emotional depth to the band's songs. Another 7-inch, Thief, Steal Me a Peach in 1993.

The band's debut album, Diary, released by indie label Sub Pop in 1994, was greeted with numerous positive reviews. That September, the band performed lead single "Seven" on an episode of The Jon Stewart Show. A few days later, they taped several songs for MTV's 120 Minutes. Through November and December, the band undertook a US tour with Shudder to Think and Soul Coughing in support of the album.

The band projected an enigmatic presence to the public. While supporting Diary, the band allowed only one publicity photo and granted just a single interview. (Though, strangely, the band posed for an advertisement for department-store chain Nordstrom. In a 1998 interview with Norm Arenas of Texas Is the Reason, Hoerner explained that the band made up a fake band name and brought in a fake lead singer for the ad shoot, only to have the store stick their real band name on the ad.) For most of its early days, the band also refused to play a show in California, for reasons that were never fully explained. When the band was asked to perform at the 1994 Almost Acoustic Christmas in Los Angeles for radio station KROQ, Hoerner refused to join them, leaving Enigk, Mendel, and Goldsmith to perform the show as a trio.

After finishing their 1994 US tour, the band regrouped to begin recording the follow-up to Diary. While the events surrounding the sessions have not been publicly discussed, the band was clearly enduring internal conflict. Rumors abounded that the root cause was Enigk's sudden conversion to Christianity. In early 1995, the band announced that it was disbanding, with Goldsmith and Mendel leaving to join Dave Grohl's fledging Foo Fighters.

There was much talk but little really known about the reasons for the break-up. While many fans focused on Enigk being a reborn Christian, Enigk and other band members later downplayed that aspect. In a letter addressed "To Seth and other readers", Enigk responded to rumors regarding his faith. Dismissing the connection between his conversion and their break-up, Enigk wrote, "I took a shot on calling upon God. He answered me. My pain was gone. I was full of joy. I had hope again. . . . I must say that the true God is the one who is in the Bible, Jesus Christ," and, "I would be a fool to say that he hasn't worked miracles in my life."

In November of 1995, Sub Pop released the band's second album, bearing only the label Sunny Day Real Estate. The album was released without cover art or liner notes, and was distributed by Sub Pop as LP2. It has also occasionally been referred to as "The Pink Album", a reference to its solid pink cover. When Sub Pop contacted the band for artwork for the release, the band had nothing to offer, so Goldsmith suggested that they "make it pink". The album included the songs recorded during the brief sessions, as well as tracks such as "Rodeo Jones" that were recorded during the sessions for Diary.

After the break up, Enigk pursued a solo career, releasing his first solo album in 1996. Hoerner moved out to a farm in rural Washington, while Mendel and Goldsmith continued with the Foo Fighters. In 1997, following a dispute with Grohl during the sessions for the second Foo Fighters record, Goldsmith departed the band, but Mendel remained.

In 1997, Sub Pop began pressing Enigk and Hoerner about the possibility of releasing a "rarities" record of Sunny Day Real Estate material, including the band's early 7-inch releases and otherwise unreleased songs, such as the band's unused contribution to The Crow: City of Angels soundtrack. Given that there wasn't quite a full album worth of material, the band decided to regroup to record a few new songs. While working on the songs, the quartet realized that whatever had driven them apart was behind them, and decided to continue working on new material, eventually signaling to Sub Pop that they wanted to release a full new album. Initially, Mendel intended to quit the Foo Fighters to rejoin Sunny Day full-time, but hedged for several months on actually quitting. Just before starting the recording sessions for the album, Mendel turned down the opportunity, noting that he didn't want to leave what he had with the Foo Fighters for a potentially tenuous reunion.

In September of 1998, the band released How It Feels to Be Something On. For the album, the remaining trio replaced Mendel with Jeff Palmer, formerly of the Mommyheads. Fans were surprised by the mellower, more mature vibe presented on the record in songs such as the title track and "Every Shining Time You Arrive". On the album, Hoerner took the opportunity to write about his environmental concerns in "100 Million". On tour a few months later, Hoerner dropped hints that their disappointment in Mendel's decision not to rejoin the band was the subject of the song "The Shark's Own Private Fuck".

While supporting the album, Sub Pop approached them about the possibility of filming the band for a live release. Two shows were documented, one on video and one on audio, in the form of Live. In the weeks after their release, the band noted its displeasure with the video and CD, complaining that Sub Pop did not allow them final approval on the artwork or on the final mixes. Having fulfilled their contractual obligations, the band left the label.

The search for a new label was a lengthy and arduous process. Several major labels were eager to sign the band, but the division within the band between remaining true to their indie roots and signing up for the big leagues wrecked the process. The situation was so difficult that it resulted in the departure of long-time manager Greg Williamson. Finally, the band signed with Time Bomb Recordings, an independent label distributed by BMG. With Time Bomb, the band hoped to have the best of both worlds: the freedom of an indie label backed by the wider distribution of a major label.

The band joined with long-time Hüsker Dü sound engineer Lou Giordano to record The Rising Tide, released in June of 2000. The band had high hopes for the release, and subsequently undertook a lengthy US tour. At the end of the tour, the band expressed its desire to finally reach out to its European fans by undertaking its first overseas tour. However, on the eve of the tour, Time Bomb pulled its tour funding, claiming that they simply could not afford to support the band overseas. It turned out that the label had invested a substantial amount of money in supporting Peter Searcy's Could You Please and Thank You, and the album had performed so poorly that the label was almost completely broke. Not only could they not support Sunny Day Real Estate overseas, they could no longer fund the band, period. Some weeks later, the label ceased operations. Disillusioned and disappointed, the band retreated home, and subsequently announced their disbanding.

After their second disbanding, Hoerner again retreated to his farm in Washington, eventually working with Chris Carrabba on tracks for Dashboard Confessional.

In 2002, Enigk and Goldsmith reunited with Mendel to form a new band, called The Fire Theft, releasing their first self-titled album in 2003. While they had the option of retaining the Sunny Day Real Estate name, the trio decided that it was time to leave the past behind them and start fresh. (Mendel remains with Foo Fighters, joining The Fire Theft when his schedule allows it.)

In 2006 Enigk reignited his solo career by recording and releasing the LP World Waits on his own label, Lewis Hollow Records. Following the October 17 release, Enigk embarked upon a supporting solo tour of the U.S. using material from his 2006 release, as well as his decade-prior solo album, Return of the Frog Queen.

In August of 2007 Enigk released more solo material in the form of a compilation of various b-sides, unrecorded demos, and live songs entitled The Missing Link. In late 2008, he recorded the follow-up to World Waits in Barcelona, Spain with an entirely new backing band. Writing quickly, and allowing his new band to improvise their own contributions to the songs, he finished the recording process rapidly. The new LP, OK Bear, was released on May 12, 2009, again on Enigk's own label, Lewis Hollow Records.

In June of 2009, it was announced Sunny Day Real Estate would reunite with all of the founding members of the group. A subsequent tour would soon follow. The band also released remastered versions of their first two albums. As of 2009, the band had been making statements from the stage implying that new recorded material might have been on the way. In early 2010, Dan Hoerner confirmed in an interview with Australian music website FasterLouder that the band were writing a new album. In a 2013 interview with MusicRadar, Mendel stated that Sunny Day Real Estate is currently inactive. According to Mendel, the band attempted to record a new full length after the end of their reunion tour, but the sessions "just fell apart."

In 2014, the band released a split 7" vinyl with Circa Survive on Record Store Day. The band's only song from the 7", "Lipton Witch," is their first new material released in 14 years.