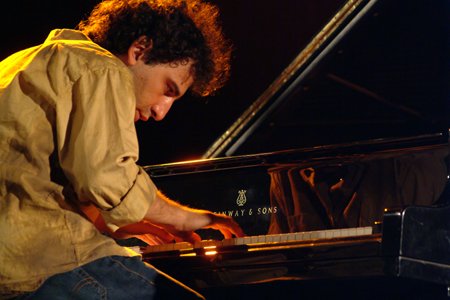 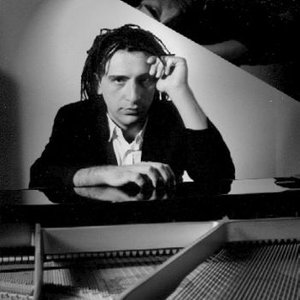 Stefano Bollani is a jazz pianist born in Milan on December 5, 1972. He made his professional debut at fifteen and received his diploma in piano from the Conservatorio Luigi Cherubini in Florence. He does classical music, contemporary jazz, Brazilian jazz, and pop rock.
Longlasting has been his collaboration (from 1996) with Enrico Rava: 12 records together, the last was Tati, ECM 2005, in trio with Paul Motian, battery.
His production and live performances span much beyond mainstream jazz, with dozens of collaborations: even in nordic songs (Gleda, Stunt records, 2005), as soloist in classic music orchestras, live broadcasting on tv (with Renzo Arbore) & radio ("il dottor Djembè" with David Riondino, Radio3), and theatre (e.g., with Lella Costa).
In 1998 Musica Jazz magazine voted him Best new Jazz Talent Of The Year and later on:
a) in 2004, he was the first one non-american to be awarded "new star" by the Swing Journal, Japan;
b) best 2006 musician according to Musica Jazz; and best record of the year (Piano solo, ECM);
c) 2007: 8th world jazz new talent in Downbeat (Usa); Allaboutjazz (New York) critics vote him among the 2007 top 5; critics award him the European Jazz Prize.
In 2008 he records "Carioca" (Emarcy) in Rio.

Jazz pianist Stefano Bollani was born in Milan, Italy, on December 5, 1972. He began playing piano as a child in order to accompany his singing, but soon concentrated solely on the instrument, enrolling in a conservatory in Florence when he was 11. There, he studied both jazz and pop music, and after graduating in 1993, added his keyboard skills to albums for many of Italy's top pop stars, including Laura Pausini, Irene Grandi, and Jovanotti. When working with the latter in 1996 he met avant-garde jazz trumpeter Enrico Rava, who invited the young pianist to play with him in Paris, an opportunity Bollani quickly accepted. He then began to release more jazz albums, first with his trio (completed by bassist Ares Tavolazzi and drummer Walter Paoli) but also as a solo artist (like on 2003's Småt Småt and 2006's Piano Solo) as well as with other trios (2002's Fleurs Bleues drew from the talents of bassist Scott Colley and drummer Clarence Penn, while 2005's Gleda: Songs from Scandinavia used his trio with bassist Jesper Bodilsen and drummer Morten Lund) and even a quintet (2006's I Visionari). Bollani has also appeared on stages at the Umbria and Montreal Jazz Festivals, among others, and has performed with musicians like Gato Barbieri, Lee Konitz, Pat Metheny, Paolo Fresu, and Phil Woods.

The pianist's ECM debut as a leader, Piano Solo, was issued in 2007. That same year he played on Tati with drummer Paul Motian in a Rava-led trio, and in duet with the trumpeter on The Third Man. In 2008 Bollani shifted gears and led two large-group ensembles for Verve. The first was entitled Carioca, while the second was simply called Big Band! The following year, he and the trio delivered Stone in the Water for ECM. In 2010 Bollani appeared as a soloist with conductor Ricardo Chailly and the Leipzig Gewandhaus Orchester in an all-Gershwin program for Decca (Gershwin: Rhapsody in Blue; Catfish Row; Concerto in F) released in Europe 2010 and globally in 2011. The same year, Orvieto, his duet recording with Chick Corea, appeared on ECM.

The pianist issued a slew of records in 2012 and 2013 in various settings, including two more duet offerings: a self-titled album with Italian pop singer Irene Grandi and O Que Será, a collection with Brazilian bandolim (a ten-string mandolin) player Hamilton de Holanda. Ever ambitious, Bollani reconvened his trio and enlisted guitarist Bill Frisell and saxophonist Mark Turner as guests in a diverse program of original material arranged for various groupings from quintet to duo. Joy in Spite of Everything was issued in the late summer of 2014 on ECM. ~ Marisa Brown & Thom Jurek, Rovi