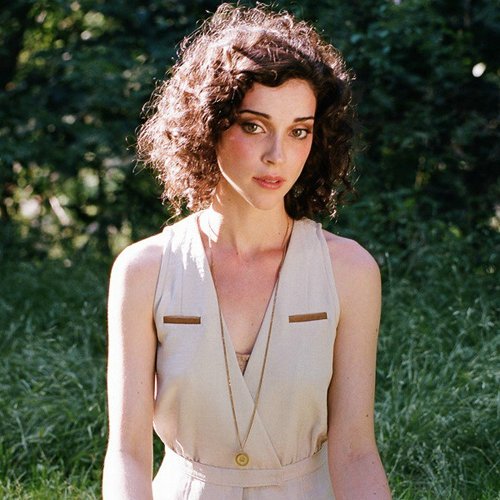 A pseudonym of Annie Clark (b. 28 Sept 1982), a USA multi-instrumentalist singer-songwriter. She was a member of The Polyphonic Spree and Sufjan Stevens' touring band. Born in Tulsa, Oklahoma, she began playing the guitar at the age of 12 and as a teenager worked as the tour manager for her uncle's band Tuck & Patti. She grew up in Dallas and attended Lake Highlands High School, graduating in 2001. Following this, she went on to attend Berklee College of Music, dropping out 3 years later. Soon after this, she joined The Polyphonic Spree. In 2003, during her time at Berklee, she released an EP with fellow students, entitled Ratsliveonnoevilstar.

Clark joined Sufjan Stevens' touring band in 2006, bringing with her a tour EP entitled Paris Is Burning. It contains three tracks, including a cover version of Jackson Browne's These Days.

Her second album for 4AD, entitled Actor, was released on 5 May 2009. It was written entirely by Clark and produced by Clark and John Congleton of The Paper Chase.

The Strange Mercy Songfacts reports that Clark wrote her third album in Seattle. She decamped to the Northwestern city to escape from the information overload she was experiencing at home and recorded Strange Mercy in a studio provided by Death Cab For Cutie drummer Jason McGerr. The album was released by 4AD on September 12, 2011 and peaked at #19 on the Billboard 200, making it her first Top 20 LP.

2) A pseudonym of singer-songwriter Vincent Bernardy, who has written and recorded music since 1980. see also St. Vincent Folk

3) A singer/songwriter from Victoria, Australia.